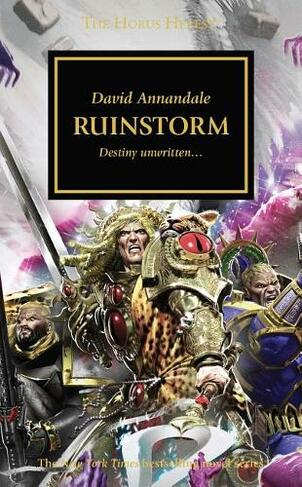 With Imperium Secundus a failed dream, the primarchs of the Triumvirate swear to reach Terra and defend the Imperium's heart. But danger awaits them, and their destinies are in their hands... Imperium Secundus lies revealed as a heretical folly. Terra has not fallen, though it remains inaccessible. Sanguinius, Guilliman and the Lion El'Johnson, the primarchs of the Triumvirate, must reach Terra at all costs. They seek to defend the Emperor, and to atone for their sins. But the Ruinstorm, a galaxy-wide maelstrom of chaos, hides the Throneworld from the primarchs. Now the fleets of three Legions depart Macragge, and the primarchs will stop at nothing to overcome the Ruinstorm. Yet an insidious enemy watches their every move, and plots against the weaknesses of the errant sons of the Emperor. Each has his own inner storm, linkand each marches towards his own ruin.

David Annandale is the author of the Horus Heresy novels Ruinstorm and The Damnation of Pythos, and the Primarchs novel Roboute Guilliman: Lord of Ultramar. He has also written Warlord: Fury of the God-Machine, the Yarrick series, several stories involving the Grey Knights, including Warden of the Blade and Castellan, as well as The Last Wall, The Hunt for Vulkan and Watchers in Death for The Beast Arises. For Space Marine Battles he has written The Death of Antagonis and Overfiend. He is a prolific writer of short fiction set in The Horus Heresy, Warhammer 40,000 and Age of Sigmar universes. David lectures at a Canadian university, on subjects ranging from English literature to horror films and video games.