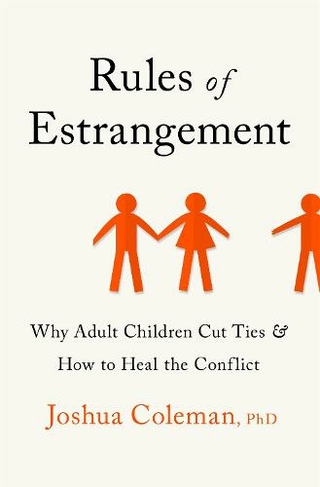 Rules of Estrangement: Why Adult Children Cut Ties and How to Heal the Conflict

'I've seen many parents and adult children grappling with these issues, and this is exactly the book they have all been waiting for.' - Lori Gottlieb Has your adult child cut off contact with you? How can you heal the pain and start to build a bridge back to them? Labelled a silent epidemic by a growing number of therapists and researchers, estrangement is one of the most disorienting and painful experiences of a parent's life. Popular opinion typically tells a one-sided story of parents who got what they deserved or overly entitled adult children who wrongly blame their parents. However, the reasons for alienation are far more complex and varied. As a result of rising rates of individualism, an increasing cultural emphasis on happiness, growing economic insecurity, and a historically recent perception that parents are obstacles to personal growth, many parents find themselves forever shut out of the lives of their adult children and grandchildren. As a trusted psychologist whose own daughter cut off contact for several years and eventually reconciled, Dr Joshua Coleman is uniquely qualified to guide parents in navigating these fraught interactions. He helps to alleviate the ongoing feelings of shame, hurt, guilt, and sorrow that commonly attend these dynamics. By placing estrangement into a cultural context, Dr Coleman helps parents better understand the mindset of their adult children and teaches them how to implement the strategies for reconciliation and healing that he has seen work in his forty years of practice. Rules of Estrangement gives parents the language and the emotional tools to engage in meaningful conversation with their child, the framework to cultivate a healthy relationship moving forward, and the ability to move on if reconciliation is no longer possible. While estrangement is a complex and tender topic, Dr Coleman's insightful approach is based on empathy and understanding for both the parent and the adult child.

Joshua Coleman, PhD, is an author and psychologist in private practice and Senior Fellow with the Council on Contemporary Families. He has presented research findings at Harvard University and The Weill Cornell Department of Psychiatry, and his advice has appeared in The New York Times, The Wall Street Journal, The Atlantic, Chicago Tribune, CNN, and many other publications. He is co-editor with historian Stephanie Coontz of seven online volumes of Unconventional Wisdom: News You Can Use: a compendium of noteworthy research on the contemporary family, gender, sexuality, poverty, and work-family issues; and the co-founder with Dr. Becca Bland of Standing Together, a centre for advancing awareness of family estrangement. He is the father of three adult children, has a teenage grandson and lives with his wife in California. He also writes music for television which has appeared on Keeping Up With the Kardashians, Lethal Weapon, Chicago Fire, Chicago PD, Longmire, Shameless, RuPaul's Drag Race, and many other shows.