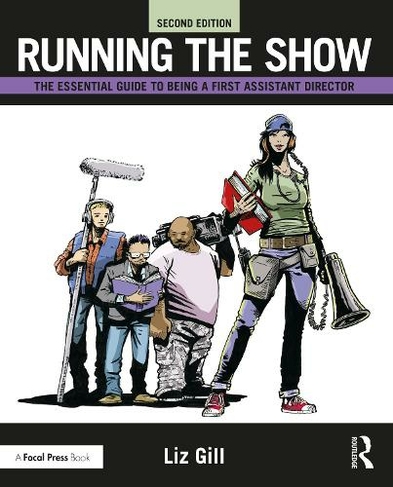 Running the Show: The Essential Guide to Being a First Assistant Director (2nd New edition)

Whether it's a crew of two hundred shooting a cast of thousands on horseback, or a crew of twelve filming one person in a room, each and every successful movie production requires a strong First Assistant Director (AD) at its helm. In this new and updated edition, veteran First AD Liz Gill walks you through the entire filmmaking process through the perspective of the First AD, from pre-production, shoot, wrap, and everything in between. This book provides invaluable insight into working as a First Assistant Director, featuring tricks-of-the-trade for breaking down a script, creating a schedule and organizing test shoots, alongside how to use turnaround time, weather cover, split days, overtime and continuous days to balance a challenging schedule and get the most from the cast, crew and the shoot. This new edition has been fully updated and expanded throughout to provide up-to-date coverage on new equipment and software, health and safety considerations and the implications of VFX. This is the essential guide to becoming a successful First Assistant Director, ideal for professional and aspiring AD's seeking to further their career, students of directing and production looking to gain a better understanding of how this department works and anyone interested in film and TV production. The accompanying eResources provide an expanded selection of sample call sheets, report templates, checklists, and other useful documents. 6 Line drawings, black and white; 27 Halftones, black and white; 4 Tables, black and white

Liz Gill has been working as a First AD since 1994 for directors such as Barry Levinson, Todd Haynes, and Kevin Reynolds, working on widely seen films such as The Omen and Bloody Sunday. She studied at Columbia University and NYU before beginning her career as an assistant to Martin Scorsese. She then worked as an Assistant Director on non-union and studio films in New York City and Los Angeles before moving to Ireland, where she is one of the top First ADs in the country. Liz is also a Director, with feature credits Gold in the Streets and Goldfish Memory as well as TV work for the BBC, RTE, Starz, Encore and Hallmark, and she was most recently Producer of the feature film Tomato Red and Series 5 and 6 the TV series Vikings.