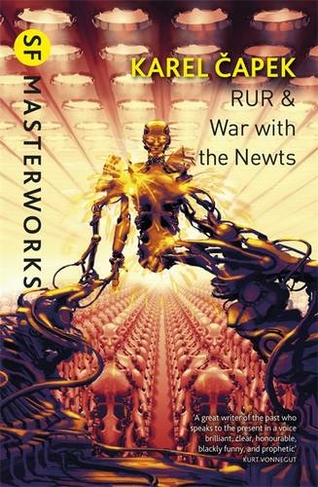 By Karel Capek (Author)
Paperback
https://www.whsmith.co.uk/products/rur-and-war-with-the-newts/karel-capek/paperback/9780575099456-12-000.html £8.19 rrp £9.99 Save £1.80 (18%)
GBP
Availability
In Stock
Free Delivery Available When You Spend £25 Or More
Details
Spend £25 on eligible products to receive free standard delivery to home or free next working day click and collect to store
Share

Written against the background of the rise of Nazism, War With the Newts concerns the discovery in the South Pacific of a sea-dwelling race, which is enslaved and exploited by mankind. In time they rebel, laying siege to the strongholds of their former masters in a global war for supremacy. R.U.R., or Rossum's Universal Robots, seen by many as a modern interpretation of the 'golem' myth, is regarded as the most important play in the history of SF. It introduced the word 'robot' and gave the genre one of its most enduring tropes.

Karel Capek (1890-1938) was one of the most important Czech writers of the 20th century and a major voice in early European science fiction. His work traversed many genres, and his most famous play, R.U.R., introduced the word 'robot' into popular usage. He died on Christmas Day 1938.