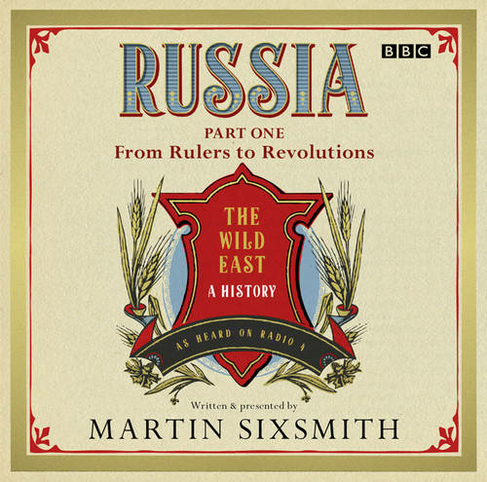 Russia: The Wild East Part One From Rulers To Revolutions Unabridged edition

The first 25 episodes from the landmark BBC Radio series. Martin Sixsmith brings his firsthand experience of reporting from Russia to this fascinating narrative, witnessing the critical moment when the Soviet Union finally lost its grip on power. Power struggles have a constant presence in his story, from the Mongol hordes that invaded in the 13th century, through the iron autocratic fists of successive Tsars. Ivan the Terrible, Catherine the Great, Peter the Great - all left their mark on a nation that pursued expansion to the East, West and South. Many Tsars flirted with reform, but the gap between the rulers and the ruled widened until, in 1917, the doomed last Tsar, Nicholas II, abdicated. The first part of Sixsmith's history ends with Lenin and the Bolsheviks forcing through the final Revolution and paving the way for the Communist state. Eyewitness accounts and readings from Russian authors and historians, from Pushkin to Solzhenitsyn, enhance this fascinating account, as well as music taken from a wide range of Russian composers including Glinka, Tchaikovsky, Borodin and Shostakovich. Martin Sixsmith traces Russia's turbulent 1000-year history from its founding to the Revolution.

Martin Sixsmith studied at Oxford, Harvard and the Sorbonne. From 1980 to 1997 he was the BBC correspondent in Moscow, Washington, Brussels and Warsaw. From 1997 to 2002 he worked for the Government as Director of Communications and Press Secretary to Harriet Harman, Alistair Darling and Stephen Byers. He is now a writer, presenter and journalist. He has written two novels, Spin and I Heard Lenin Laugh, and is the author of three non-fiction titles - Moscow Coup: The Death of the Soviet System, The Litvinenko File: The True Story of a Death Foretold and The Lost Child of Philomena Lee: A Mother, Her Son and a Fifty Year Search.