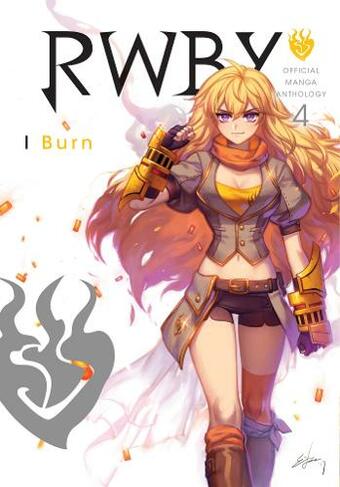 By , Monty Oum (Creator)
Paperback
https://www.whsmith.co.uk/products/rwby-official-manga-anthology-vol-4-i-burn-rwby-official-manga-anthology-4/monty-oum/paperback/9781974702824-12-000.html £7.37 rrp £8.99 Save £1.62 (18%)
GBP
Availability
In Stock
Free Delivery Available When You Spend £25 Or More
Details
Spend £25 on eligible products to receive free standard delivery to home or free next working day click and collect to store
Share

Straight from Rooster Teeth's hit animation series, a new four-volume anthology series featuring stories from various manga creators, each focusing on a different member of Team RWBY! The world of Remnant is filled with horrific monsters bent on the destruction of humanity. Fortunately, the kingdoms of the world have risen to combat these forces by training powerful Huntsmen and Huntresses at academies around the planet. Ruby Rose, Weiss Schnee, Blake Belladonna and Yang Xiao Long are four such Huntresses in training. All-new short stories set in the world of RWBY from more than fifteen different manga creators in one single volume! Includes a full-color four-page story and four full-color illustrations. This volume focuses on Yang Xiao Long from TEAM RWBY. Plus, bonus messages from the illustrators and creators, with longer notes from RWBY character designer Ein Lee and actress Barbara Dunkelman, the voice of Yang Xiao Long herself! 0