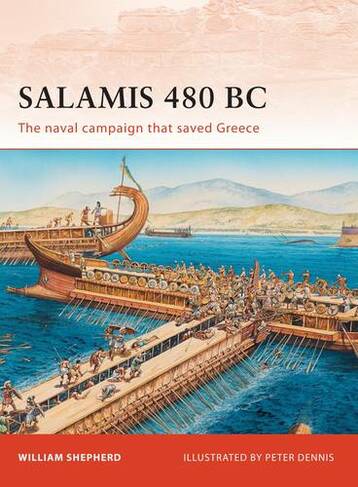 Salamis 480 BC: The Naval Campaign That Saved Greece (Campaign No. 222)

By William Shepherd (Author), Peter Dennis (Illustrator)
Paperback
https://www.whsmith.co.uk/products/salamis-480-bc-the-naval-campaign-that-saved-greece-campaign-no-222/william-shepherd/peter-dennis/paperback/9781846036842-01-000.html £13.59 rrp £15.99 Save £2.40 (15%)
GBP
Availability
Currently unavailable. We don't know when or if this item will be back in stock
Free Saver Delivery on orders over £20
Details
FREE SHIPPING over £20 for Saver Delivery
Share

In 480 BC, the Greek and Persian fleets met in a battle in the strait between Attica and the island of Salamis. Although outnumbered, the Greeks delivered a crushing victory that ended the Persian threat to Greece. This book draws on the findings of archaeological, technological and naval research, as well as on original historical sources to vividly recreate one of the most important naval campaigns in world history. Illustrations (chiefly col.)

William Shepherd studied classics at Clare College, Cambridge, in the 1960s and then embarked on a career in publishing, which finally brought him to Osprey, retiring from the position of chief executive in 2007. He is author of The Persian War (Cambridge, 1982), translated from Herodotus. He has also written reading books for children and articles in the Osprey Military Journal, of which he was joint editor, and makes regular contributions to the Osprey blog. He lives in the Cherwell Valley, north of Oxford.