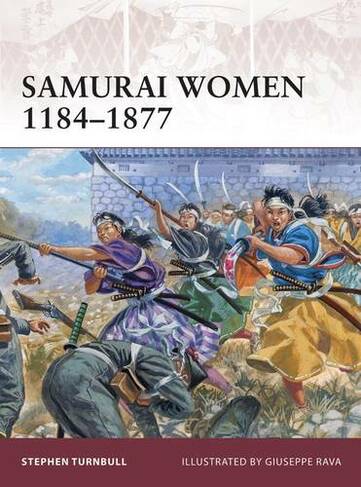 From when the Empress Jingo-kogo led an invasion of Korea while pregnant with the future Emperor Ojin, tales of female Japanese warriors have emerged from Japan's rich history. Using material that has never been translated into English before, this book presents the story of Japan's female warriors for the first time, revealing the role of the women of the samurai class in all their many manifestations, investigating their weapons, equipment, roles, training and belief systems. Crucially, as well as describing the women who were warriors in their own right, like Hauri Tsuruhime and the women of Aizu, this book also looks at occasions when women became the power behind the throne, ruling and warring through the men around them. Illustrations (chiefly col.)

Stephen Turnbull is recognized as one of the world's foremost military historians of the medieval and early modern periods. He first rose to prominence as a result of his 1977 book, The Samurai: A Military History. Since then he has achieved an equal fame in writing about European military subjects and has had 30 books published. He has always tried to concentrate on the less familiar areas of military history, in particular such topics as Korea, Eastern Europe, the Baltic states and the Teutonic Knights. Turnbull took his first degree at Cambridge University, and has two MAs (in Theology and Military History) from Leeds University. In 1996 he received a PhD from Leeds for his work on Japanese religious history. He travels extensively and also runs a well-used picture library. He currently divides his time between lecturing in Japanese Religion and History at Leeds University and freelance writing.