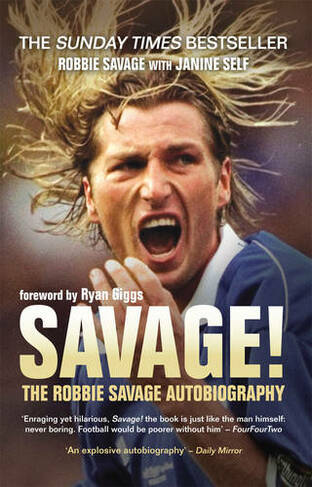 By Janine Self (Author), Robbie Savage (Author)
Paperback
https://www.whsmith.co.uk/products/savage-the-robbie-savage-autobiography/janine-self/robbie-savage/paperback/9781845967161-01-000.html £11.95 rrp £12.99 Save £1.04 (8%)
GBP
Availability
Currently unavailable. We don't know when or if this item will be back in stock
Free Saver Delivery on orders over £20
Details
FREE SHIPPING over £20 for Saver Delivery
Share

Robbie Savage could have been just another Manchester United reject. Instead, he used the Old Trafford scrapheap as a springboard to become one of the most instantly recognisable footballers in the Premier League, despite being told by Sir Alex Ferguson he was not good enough to stay in the class of '92 alongside David Beckham, Paul Scholes, Ryan Giggs, Nicky Butt and Gary Neville. For the last 17 years, Savage has carved out a reputation as a hard man and wind-up merchant with an unerring ability to grab a headline. From deliberately getting Tottenham's Justin Edinburgh sent off in a Wembley cup final to the 'Jobbiegate' row with referee Graham Poll and the bust-ups with John Toshack, Rio Ferdinand, Graeme Souness and Paul Jewell, the list is endless. Yet numerous footballing legends will testify to the skill of the midfielder, who has starred for Crewe, Leicester, Birmingham, Blackburn and Derby, and won 39 international caps for Wales. Behind the long blond hair, the Armani tattoo and the flamboyant cars, Savage has always been the heartbeat of his team. Savage! provides a unique insight into the extraordinary life of an elite sportsman, a colourful character and loving family man. Love him or loathe him, Robbie Savage's story is a remarkable one. 1 x 8pp b/w

Robbie Savage currently captains Derby County and has played for a number of other English clubs. He has won 39 international caps for Wales. Janine Self is a sportswriter with 20 years' experience on national newspapers.