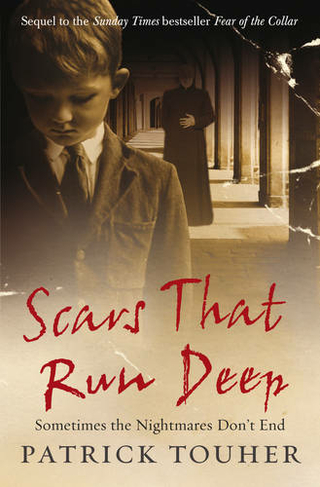 Leaving his abusive Irish boarding school after eight long years, Patrick Touher thought his troubles were over. But the adult world was a dangerous place for a naive adolescent. From the Dublin Catholic boys' home to arriving alone in London, again Patrick is seen as easy prey. Yet Patrick's strength, honesty and sense of humour never left him. The boy they couldn't break fought back and eventually found love and a family. But the shadow of his early years was always with him. With the encouragement of his wife - a constant witness to his traumatic nightmares - Patrick set about taking the Christian Brother to task. The eagerly awaited sequel to bestseller Fear of the Collar that doesn't disappoint, Scars that Run Deep is a deeply moving and ultimately triumphant true story.

An orphan, Patrick Touher spent his early years in a foster family before being sent to Artane Industrial School in Dublin at the age of seven. Living there from 1950 to 1958, he was trained as a baker and went into this trade on leaving at 16. He spent the 1960s and 70s travelling, and in 1972 he married his late wife Pauline and they had three children together. In 2003, Patrick received a settlement from the Commission to Inquire into Child Abuse and he was finally able to put the past behind him.