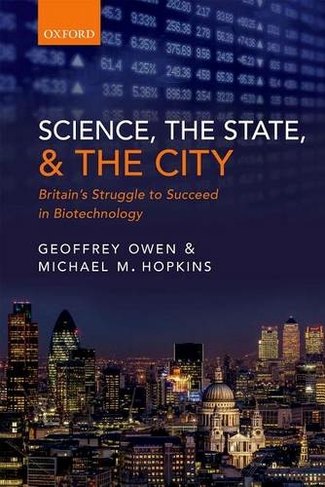 Science, the State and the City Britain's Struggle to Succeed in Biotechnology

The book examines the evolution of one of the most important technologies that has emerged in the last fifty years: biotechnology - the use of living organisms, or parts thereof to create useful products and services. The most important application of biotechnology has been in medicine, in the development of new drugs. The central purpose of the book is to explain how firms based in the US took the lead in commercialising the technology, and why it has been so difficult for firms in other countries to match what the leading American companies have achieved. The book looks at the institutions and policies which have underpinned US success in biotechnology. This is the US innovation "ecosystem," and it is made up of several interlocking elements which constitute a powerful competitive advantage for US biotechnology firms. These include, a higher education system which has close links with industry, massive support from the Federal government for biomedical research, and a financial system which is well equipped to support young entrepreneurial firms in a science-based industry. In the light of US experience the book examines in detail the performance of UK biotechnology firms over the past forty years, starting with the creation of the UK's first dedicated biotech firm, Celltech, in 1980. The book shows how the UK made a promising start in the 1980s and 1990s but failed to build on it. Several leading firms failed, and after an initial burst of enthusiasm investors lost confidence in the British biotech sector. It is only the last few years that the sector has staged a revival, attracting fresh investment from the US as well from the UK. The story told in this book, based on extensive interviews with industry participants, investors, and policy makers in the UK, Continental Europe, and the US, sheds new light on one of the central issues facing governments in the advanced industrial countries - how to create and sustain new science-based industries.

Sir Geoffrey Owen was educated at Rugby and Balliol College, Oxford, and spent most of his career at the Financial Times, serving as industrial editor, US correspondent based in New York, deputy editor (1973-1980) editor (1980-1990) - also spent two years with the Industrial Reorganisation Corporation and three with British Leyland. He joined the LSE in 1990, served as visiting fellow in the Department of Management until 2013, teaching in the field of corporatestrategy and international competition. Books include From Empire to Europe: the decline and revival of British industry since the Second Word War (HarperCollins 1999).) The rise and fall of great companies: Courtaulds and the reshaping of the man-made fibres industry (OUP 2010).Michael M. Hopkins is a Senior Lecturer and Director of Research for the Science Policy Research Unit (SPRU) at the University of Sussex. After studying Biology at Sussex, he worked in the biotechnology industry as a sales and marketing manager, selling reagents for research. He joined SPRU as a research assistant in 1997, later completing his doctoral training in Science and Technology Policy Studies. His research focuses on policies and strategies for biomedical innovation. Previouspublications include A Biotechnology Managers Handbook (Woodhead Publishing 2012).