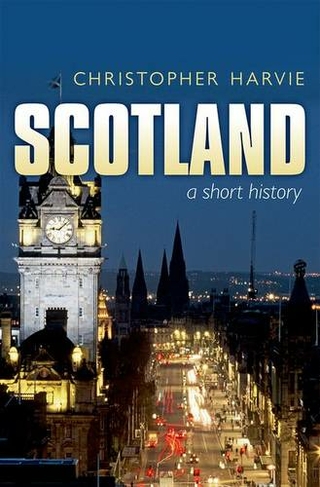 Christopher Harvie, one of Scotland's leading historians and political writers, takes a long view of Scotland: its land, people, and culture. Scotland: A History sweeps from the earliest settlements to the new Parliament of 1999 and beyond. It describes the unique multi-ethnic kingdom which emerged from the Dark Ages, the small, proud nation manoeuvring among the great powers of medieval Europe, and the radical reformation which forced a compromise with its mighty southern neighbour. Harvie follows Scotland's tense partnership with England for over 400 years, through dual monarchy and union, enlightenment and empire, industrialization and de-industrialization. First published over a decade ago, this new edition has been extended - at both ends - to include recent discoveries about Scotland's early pre-historic settlements, through to a new final chapter covering the history, politics, and economics of the country under the Holyrood Parliament - and the background to the controversy over the Independence Referendum of 2014. 24 black & white halftones, 4 maps

Christopher Harvie was born in 1944 in then-industrial Motherwell, and brought up in the Scottish Borders, to which he has now returned, to look after his near-centenarian parents. The author of fifteen books about the European, British, and Scottish past and contemporary affairs, he was a founder-historian at the Open University in 1969, and taught at the historic University of Tuebingen from 1980-2007. Associated with Gordon Brown in the frustrated devolutioncampaign of the 1970s, he served as an SNP member of the Scottish Parliament 2007-11 and as adviser to Scottish First Minister, Alex Salmond. The HERALD newspaper voted him its 'Free Spirit of Parliament' in 2008, and the Berlin government gave him its Bundesverdienstkreuz in 2012.