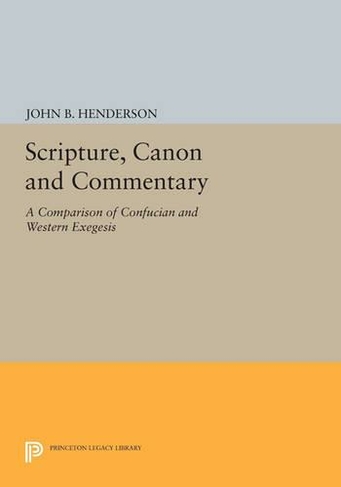 In this major contribution to the study of the Chinese classics and comparative religion, John Henderson uses the history of exegesis to illuminate mental patterns that have universal and perennial significance for intellectual history. Henderson relates the Confucian commentarial tradition to other primary exegetical traditions, particularly the Homeric tradition, Vedanta, rabbinic Judaism, ancient and medieval Christian biblical exegesis, and Qur'anic exegesis. In making such comparisons, he discusses some basic assumptions common to all these traditions--such as that the classics or scriptures are comprehensive or that they contain all significant knowledge or truth and analyzes the strategies deployed to support these presuppositions. As shown here, primary differences among commentarial or exegetical traditions arose from variations in their emphasis on one or another of these assumptions and strategies. Henderson demonstrates that exegetical modes of thought were far from arcane: they dominated the post-classical/premodern intellectual world. Some have persisted or re-emerged in modern times, particularly in ideologies such as Marxism. Written in an engaging and accessible style, Scripture, Canon, and Commentary is not only a challenging interpretation of comparative scriptural traditions but also an excellent introduction to the study of the Confucian classics. Originally published in 1991. The Princeton Legacy Library uses the latest print-on-demand technology to again make available previously out-of-print books from the distinguished backlist of Princeton University Press. These editions preserve the original texts of these important books while presenting them in durable paperback and hardcover editions. The goal of the Princeton Legacy Library is to vastly increase access to the rich scholarly heritage found in the thousands of books published by Princeton University Press since its founding in 1905.