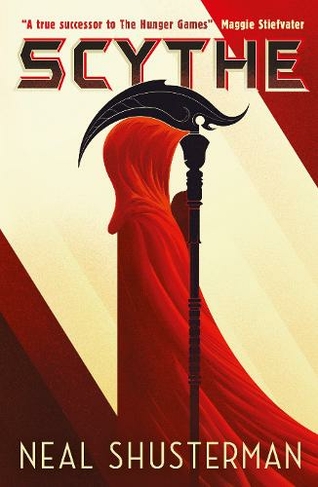 Scythe: (Arc of a Scythe)

"A true successor to The Hunger Games." Maggie Stiefvater In a perfect world, what is there left to fear? A chilling and thought-provoking sci-fi novel from New York Times bestselling author Neal Shusterman. A dark, gripping and witty thriller in which the only thing humanity has control over is death. In a world where disease, war and crime have been eliminated, the only way to die is to be randomly killed ("gleaned") by professional scythes. Citra and Rowan are teenagers who have been selected to be scythes' apprentices, and despite wanting nothing to do with the vocation, they must learn the art of killing and understand the necessity of what they do. Only one of them will be chosen as a scythe's apprentice and as Citra and Rowan come up against a terrifyingly corrupt Scythedom, it becomes clear that the winning apprentice's first task will be to glean the loser.

Neal Shusterman is an award-winning author whose books include the New York Times bestselling Unwind series and Challenger Deep, which won a National Book Award. He also writes screenplays for film and television, for shows such as Goosebumps and Animorphs. He lives in Southern California with his four children. Follow him on Twitter: @NealShusterman