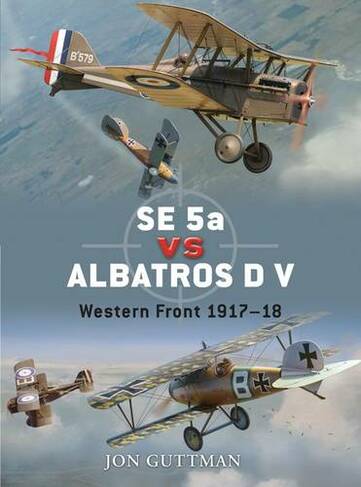 Amid the ongoing quest for aerial superiority during World War I, the late spring of 1917 saw two competing attempts to refine proven designs. The Royal Aircraft Factory SE 5a incorporated improvements to the original SE 5 airframe along with 50 more horsepower to produce a fast, reliable ace-maker. The Albatros D V, a sleeker looking development of the deadly D III of 'Bloody April' notoriety, proved to be more disappointing as it suffered a rash of lower wing failures. Nevertheless, Albatrosen remained the most numerically important fighters available when the Germans launched their final offensive on 21 March 1918. Despite its shortcomings, German tactics and skill made the Albatros D V a dangerous foe that SE 5a pilots dismissed at their peril. This title tells the story of the design and development of these two fighters and concludes with their dramatic fights in the last year of World War I. Illustrations (some col.)

A resident of Leesburg, Virginia, Jon Guttman is senior editor, research director and contributing writer for Primedia Enthusiast Publications. Specialising in World War 1 aviation, he has written eleven titles in the past including the popular Balloon Busting Aces of World War I in Osprey's Aircraft of the Aces series. The author lives in Leesburg, Virginia.