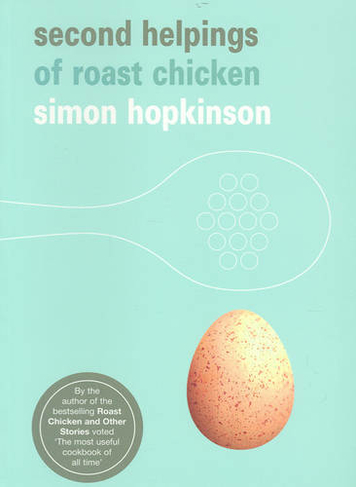 Second Helpings of Roast Chicken takes forty-seven of Simon Hopkinson's favourite ingredients as a starting point. There is a section on apples with a perfect apple tart recipe, a section on curry recipes with Constance Spry's original Coronation chicken salad dressing and a section on duck, with recipes for Braised duck with peas and classic Roast duck and apple sauce. There are also recipes for Pear and ginger sponge, 'a good' Waldorf salad, Armenian lamb pilaf, Baked whole plaice with lemon butter sauce and what is, quite simply, the best Bloody Mary. Roast Chicken and Other Stories was voted the most useful cookbook of all time by Waitrose Food Illustrated and also won the Andre Simon and Glenfiddich awards. Second Helpings of Roast Chicken will provide new inspiration the many fans of Simon Hopkinson's sensible, practical, creative approach to cooking and love of good food, prepared to please rather than simply impress. colour illustrations throughout

Born in Bury, Lancashire, Simon Hopkinson left school at 17 to begin a career as a chef. He opened his first restaurant, the Shed, near Fishguard, just before his 21st birthday. In 1983 he launched himself on the London restaurant scene, becoming chef at Hilaire in the Old Brompton Road. He swiftly found himself one of the most acclaimed young chefs in the business and his friendship with Terence Conran led to the opening of Bibendum in the restored Michelin building in 1987. He retired as a full-time chef in 1995 to concentrate more on writing. As well as Roast Chicken and Other Stories his books include Gammon & Spinach (1998) and The Prawn Cocktail Years (1999) and he also writes a column in the Independent. His critically acclaimed cookery writing has won him the Andre Simon award, and the Glenfiddich Award three times.