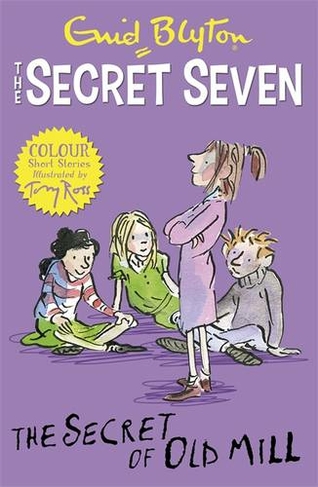 The Secret Seven are siblings Peter and Janet, and Jack, Barbara, Pam, Colin and George. Together they are The Secret Seven - ready to solve any mystery, any time - in Enid Blyton's classic series of 15 mystery novels. Peter and Janet think Old Mill is perfect for their Seven Society meetings - until they make a startling discovery about some stolen goods. So the gang hatch a plan to wait for the thieves to come back ... In addition to the Secret Seven novels, Enid Blyton wrote six short stories based on the characters which are published in The Secret Seven Short Story Collection (Hodder). The stories are also available in individual volumes, divided into chapters to make them ideal for newly confident readers. They have been illustrated in full colour by Tony Ross. Full colour illustrations throughout

Enid Blyton's books have sold over 500 million copies and have been translated into other languages more often than any other children's author.She wrote over 700 books and about 2,000 short stories, including favourites such as The Famous Five,The Secret Seven, The Magic Faraway Tree, Malory Towers and Noddy. Born in London in 1897, Enid lived much of her life in Buckinghamshire and adored dogs, gardening and the countryside. She died in 1968 but remains one of the world's best-loved storytellers. Tony Ross was born in London and studied at the Liverpool School of Art and Design. He has worked as a cartoonist, a graphic designer, as the Art Director of an advertising agency, and as Senior Lecturer in Art at Manchester Polytechnic. Tony is one of the most popular and successful children's illustrators of all time, best known for illustrating Horrid Henry and the works of David Walliams. Tony's books have been translated into 40 languages in over 100 countries. He lives in Macclesfield.