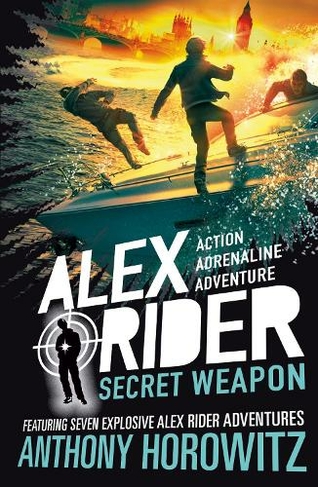 By Anthony Horowitz (Author)
Paperback
https://www.whsmith.co.uk/products/secret-weapon/anthony-horowitz/paperback/9781406390582-12-000.html £6.55 rrp £7.99 Save £1.44 (18%)
GBP
Availability
In Stock
Free Delivery Available When You Spend £25 Or More
Details
Spend £25 On Eligible Products To Receive Free Standard Delivery To You Home Or Free Next Working Day Click And Collect To Store
Share

An essential collection of seven explosive Alex Rider stories by number one bestselling author, Anthony Horowitz. Ever since MI6 recognized his potential, Alex Rider has constantly been thrust into the line of danger. From a routine visit to the dentist that turns into a chase through the streets of London, to a school trip with a deadly twist, no day has ever been ordinary for the teenage super-spy. This collection of thrilling adventures features familiar and new assailants from the best-loved world of Alex Rider, and also includes three never-before-seen stories.

Anthony Horowitz is the author of the number one bestselling Alex Rider books and the Power of Five series. He enjoys huge international acclaim as a writer for both children and adults. After the success of his first James Bond novel, Trigger Mortis, he was invited back by the Ian Fleming Estate to write a second, Forever and a Day. His latest crime novel, The Word Is Murder, introducing Detective Daniel Hawthorne, was a bestseller. Anthony has won numerous awards, including the Bookseller Association/Nielsen Author of the Year Award, the Children's Book of the Year Award at the British Book Awards, and the Red House Children's Book Award. He has also created and written many major television series, including Collision, New Blood and the BAFTA-winning Foyle's War. You can find out more about Anthony and his work at: www.anthonyhorowitz.com