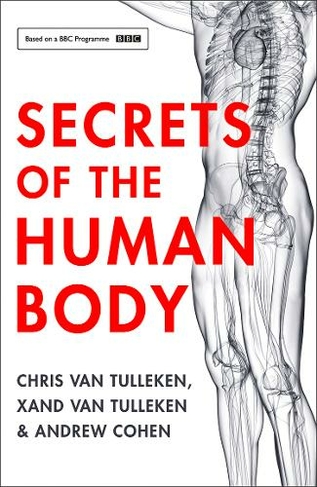 Secrets of the Human Body

206 bones. One heart. Two eyes. Ten fingers. You may think you know what makes up a human. But it turns out our bodies are full of surprises. What makes tears of joy different from tears of sadness? Why is a gut feeling so much smarter than you think? And why is 90% of you not even human? This book turns your knowledge of the human body on its head. The effervescent van Tulleken twins bring their knowledge and charm to the page to reveal just how well our bodies keep secrets from the things that want to exploit it: bacteria, viruses, fungi, parasites, larger predators and, crucially, other people. They reveal the remarkable stories behind the science we are not meant to know, on matters of life and death. Leading us through these revelations are tales of everyday miracles - the human stories that bind every one of us together through the universal stages of life. Chris and Xand van Tulleken reveal the incredible abilities every human shares, leading us to discover the secrets that make every ordinary human body ... extraordinary.

Chris van Tulleken trained in medicine in Oxford and is a Member of the Royal College of Physicians. He has a diploma in Tropical Medicine from the London School of Tropical Medicine and after more than a decade working in the NHS he is now doing a PhD in Molecular Virology under the supervision of Greg Towers at UCL. Xand van Tulleken has a diploma in Tropical Medicine, a Diploma in International Humanitarian Assistance and a Master's in Public Health from Harvard, where he was a Fulbright Scholar. He is a contributing editor to the first edition of the Oxford Handbook of Humanitarian Medicine and has worked for Doctors of the World, Merlin and the World Health Organisation in humanitarian crises around the world. Chris and Xand have worked on a number of projects together, including Operation Ouch!, a 2x BAFTA-winning children's health show on CBBC. Additionally, the two have collaborated on Horizon: Fat vs Sugar, Horizon: Is Binge Drinking Really That Bad for You?, The Secret Life of Twins and Operation Ouch: Blow Your Mind. And in their younger and slightly fuller-haired days, Chris and Xand starred in a series called Medicine Men Go Wild, a show in which they did, in fact, go wild. Andrew Cohen is Head of the BBC Science Unit and the Executive Producer of the BBC series Secrets of the Human Body. He has been responsible for a wide range of science documentaries including Horizon, the Wonders trilogy, Stargazing Live and Human Universe. He lives in London with his wife and three children.