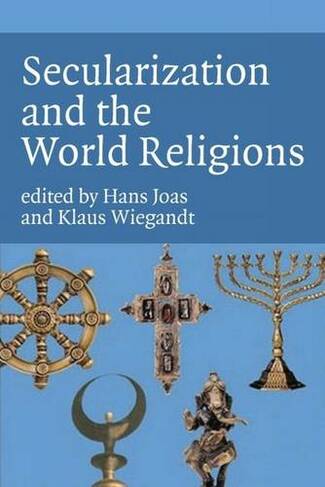 Secularization and the World Religions

By Hans Joas (Contributor), Klaus Wiegandt (Contributor)
Paperback
https://www.whsmith.co.uk/products/secularization-and-the-world-religions/hans-joas/klaus-wiegandt/paperback/9781846311888-01-000.html £13.75 rrp £14.95 Save £1.20 (8%)
GBP
Availability
Currently unavailable. We don't know when or if this item will be back in stock
Free Saver Delivery on orders over £20
Details
FREE SHIPPING over £20 for Saver Delivery
Share

The question of religion, its contemporary and future significance and its role in society and state is currently perceived as an urgent one by many and is widely discussed within the public sphere. But it has also long been one of the core topics of the historically oriented social sciences. The immense stock of knowledge furnished by the history of religion and religious studies, theology, sociology and history has to be introduced into the public conscience today. This can promote greater awareness of the contemporary global religious situation and its links with politics and economics and counter rash syntheses such as the "clash of civilizations". This volume is concerned with the connections between religions and the social world and with the extent, limits, and future of secularization. The first part deals with major religious traditions and their explicit or implicit ideas about the individual, social and political order. The second part gives an overview of the religious situation in important geographical areas. Additional contributions analyze the legal organization of the relationship between state and religion in a global perspective and the role of the natural sciences in the process of secularization. The contributors are internationally renowned scholars like Winfried Brugger, Jose Casanova, Friedrich Wilhelm Graf, Hans Joas, Hans G. Kippenberg, Gudrun Kramer, David Martin, Eckart Otto and Rudolf Wagner.