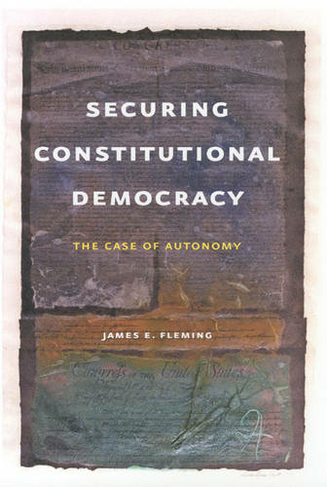 Famously described by Louis Brandeis as "the most comprehensive of rights" and "the right most valued by civilized men," the right of privacy or autonomy is more embattled during modern times than any other. Debate over its meaning, scope, and constitutional status is so widespread that it all but defines the post-1960s era of constitutional interpretation. Conservative Robert Bork called it "a loose canon in the law," while feminist Catharine MacKinnon attacked it as the "right of men to be left alone to oppress women." Can a right with such prominent critics from across the political spectrum be grounded in constitutional law? In this book, James E. Fleming responds to these controversies by arguing that the right to privacy or autonomy should be grounded in a theory of securing constitutional democracy. His framework seeks to secure the basic liberties that are preconditions for deliberative democracy - to allow citizens to deliberate about the institutions and policies of their government - as well as deliberative autonomy - to enable citizens to deliberate about the conduct of their own lives. Together, Fleming shows, these two preconditions can afford everyone the status of free and equal citizenship in our morally pluralistic constitutional democracy.

James E. Fleming is professor of law at Fordham University School of Law. He is coauthor of American Constitutional Interpretation.