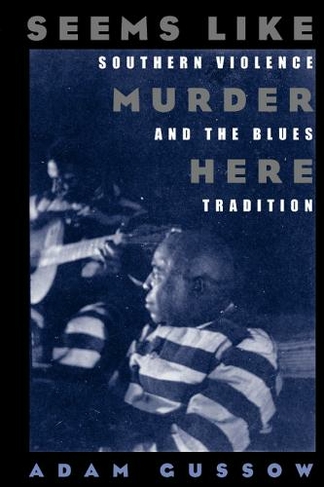 Taking its title from a lyric by Mississippi bluesman Charley Patton, "Seems Liks Murder Here" offers a revealing new account of the blues tradition. Far from mere laments about lost loves and "hard times", blues songs and literature emerge in this provocative work as vital responses to the violent realities and traumatic legacies of African American life in the Jim Crow South. Blues recording artist and critic Adam Gussow begins his story in the 1890s, when the spectacle lynching of blacks became an insidious part of Southern life. Although lynchings are seldom referred to directly in blues songs, veiled references to them abound, and Gussow identifies these scattered mentions, tying them to real-life incidents and historical events in the autobiographies of bluesmen and -women. Southern violence, he shows also enters the blues tradition through folklore about "badmen": African Americans who take the lives of white aggressors in self-defence. Blues songs and literature, meanwhile, teem with searing depictions of bloodshed, such as the cutting and shooting that blacks inflicted on one another in juke joints. For Gussow, such expressive acts of violence are the quintessential blues gesture - burning examples of racial and romantic anguish. As Langston Hughes once wrote, "My love might turn into a knife/instead of to a song". With interpretations of classic songs and writings, from the autobiographies of W.C. Handy, David Honeyboy Edwards, and B.B. King to the poetry of Hughes and the novels of Zora Neale Hurston, "Seems Like Murder Here" should reshape our understanding of the blues and its enduring power.

Adam Gussow is assistant professor of English and southern studies at the University of Mississippi. He is the author of Mister Satan's Apprentice: A Blues Memoir and has been a professional blues harmonica player for many years, touring widely in the 1990s as part of the Harlem-based duo Satan and Adam.