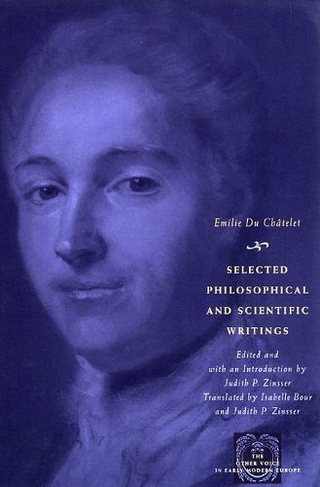 Though most historians remember her as the mistress of Voltaire, Emilie Du Chatelet (1706-49) was an accomplished writer in her own right, who published multiple editions of her scientific writings during her lifetime, as well as a translation of Newton's "Principia Mathematica" that is still the standard edition of that work in French. Had she been a man, her reputation as a member of the eighteenth-century French intellectual elite would have been assured. In the 1970s, feminist historians of science began the slow work of recovering Du Chatelet's writings and her contributions to history and philosophy. For this edition, Judith P. Zinsser has selected key sections from Du Chatelet's published and unpublished works, as well as related correspondence, part of her little-known critique of the Old and New Testaments, and a treatise on happiness that is a refreshingly uncensored piece of autobiography - making all of them available for the first time in English. The resulting volume will recover Du Chatelet's place in the pantheon of French letters and culture. 15 line drawings

Judith P. Zinsser is professor of history and an affiliate in the women's studies program at Miami University. She is the author of Emilie Du Chatelet: Daring Genius of the Enlightenment. Isabelle Bour is professor of eighteenth-century English studies at the Sorbonne.