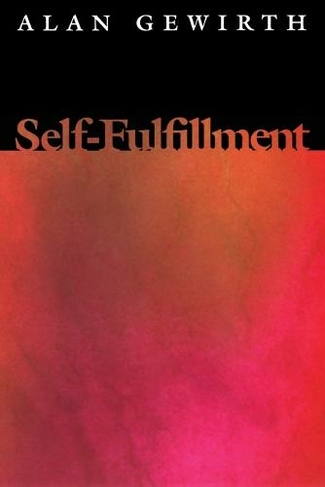 Cultures around the world have regarded self-fulfillment as the ultimate goal of human striving and as the fundamental test of the goodness of a human life. The ideal has also been criticized, however, as egotistical or as so value-neutral that it fails to distinguish between, for example, self-fulfilled sinners and self-fulfilled saints. Alan Gewirth presents here a systematic and highly original study of self-fulfillment that seeks to overcome these and other arguments and to justify the high place that the ideal has been accorded. He does so by developing an ethical theory that ultimately grounds the value of self-fulfillment in the idea of the dignity of human beings. Gewirth begins by distinguishing two models of self- fulfillment--aspiration-fulfillment and capacity-fulfillment--and shows how each of these contributes to the intrinsic value of human life. He then distinguishes between three types of morality--universalist, particularist, and personalist--and shows how each contributes to the values embodied in self-fulfillment. Building on these ideas, he develops a Odialectical' conception of reason that shows how human rights are central to self-fulfillment. Gewirth also argues that self-fulfillment has a social as well as an individual dimension: that the nature of society and the obstacles that disadvantaged groups face affect strongly the character of the self-fulfillment that persons can achieve. Bold in scope and rigorous in execution, Self-Fulfillment is a powerful new contribution to moral, social, and political philosophy.

Alan Gewirth is Edward Carson Waller Distinguished Service Professor of Philosophy at the University of Chicago. He is the author of "Reason and Morality, The Community of Rights, "and" Human Rights: Essays on Justification and Applications."