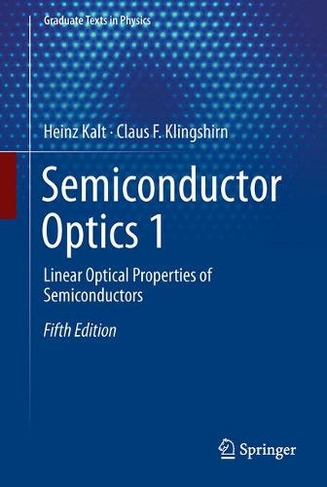 This revised and updated edition of the well-received book by C. Klingshirn provides an introduction to and an overview of all aspects of semiconductor optics, from IR to visible and UV. It has been split into two volumes and rearranged to offer a clearer structure of the course content. Inserts on important experimental techniques as well as sections on topical research have been added to support research-oriented teaching and learning. Volume 1 provides an introduction to the linear optical properties of semiconductors. The mathematical treatment has been kept as elementary as possible to allow an intuitive approach to the understanding of results of semiconductor spectroscopy. Building on the phenomenological model of the Lorentz oscillator, the book describes the interaction of light with fundamental optical excitations in semiconductors (phonons, free carriers, excitons). It also offers a broad review of seminal research results augmented by concise descriptions of the relevant experimental techniques, e.g., Fourier transform IR spectroscopy, ellipsometry, modulation spectroscopy and spatially resolved methods, to name a few. Further, it picks up on hot topics in current research, like quantum structures, mono-layer semiconductors or Perovskites. The experimental aspects of semiconductor optics are complemented by an in-depth discussion of group theory in solid-state optics. Covering subjects ranging from physics to materials science and optoelectronics, this book provides a lively and comprehensive introduction to semiconductor optics. With over 120 problems, more than 480 figures, abstracts to each chapter, as well as boxed inserts and a detailed index, it is intended for use in graduate courses in physics and neighboring sciences like material science and electrical engineering. It is also a valuable reference resource for doctoral and advanced researchers. 29 Illustrations, color; 248 Illustrations, black and white; XIX, 559 p. 277 illus., 29 illus. in color.

Heinz Kalt studied Physics at the Universities of Bielefeld and Bonn. He earned his doctoral degree in Physics from J.W. Goethe University in Frankfurt/Main in 1985 for a Dissertation (supervised by C. Klingshirn) on laser-induced gratings in CdS. During a postdoc stay at Center for Applied Quantum Electronics of North Texas State University in Denton (USA) he studied high-excitation phenomena and carrier dynamics in III-V semiconductors in the group of A. Smirl. There he also gave his first lecture on semiconductor optics to graduate students. H. Kalt continued his research work at Max Planck Institute for Solid-State Research in the group of W. Ruhle and H.J. Queisser and at University Kaiserslautern again with C. Klingshirn. His investigations on optical properties of III-V multi-valley semiconductors formed the basis of his Habilitation Thesis (1993) which was also published in Springer Series in Solid-State Sciences. A second research focus in this time was the understanding of fundamental exciton and pair recombination mechanisms in the search for laser materials for the blue and visible spectral range.In 1994 Heinz Kalt was appointed Professor of Applied Physics at Universitat Karlsruhe (TH) (now Karlsruhe Institute of Technology, KIT). Since then his research interest included temporally and spatially resolved optical spectroscopy of semiconductor nano-structures, relaxation and transport dynamics of excitons, high-excitation effects, excitonic spin injection, storage and dynamics, ZnO nano-rods, random lasing, semiconductor micro-cavities, artificial organic light-harvesting complexes, optical whispering-gallery resonators, optical bio-sensing, polymer-based flexible photonics, modulation spectroscopy, and novel absorber materials for thin-film solar cells. H. Kalt has (co-)authored more than 350 publications mainly in the field of semiconductor optics.Heinz Kalt served as Dean of the Physics Department at KIT and as Dean of Studies of Karlsruhe School of Optics and Photonics (KSOP). He is currently Ombudsperson for good scientific praxis and elected member of the KIT Senate.Claus F. Klingshirn studied Physics at the University of Erlangen finishing his Ph.D. Thesis on ZnO in 1975. He stayed as postdoc at the Laboratoire de Spectroscopie du Corps Solide in Strasbourg, working on Cu-Halides and ZnO. In 1976 he moved to the Institute of Applied Physics at the University Karlsruhe finishing his Habilitation Thesis in 1980. In 1981 he was appointed Associate Professor at the Institute of Physics at the University in Frankfurt am Main, in 1987 Full Professor at the University in Kaiserslautern and 1993 at the University Karlsruhe, now Karlsruhe Institute of Technology (KIT). In 1986 he spent a sabbatical at the AT&T Bell Labs in Holmdel, in 1996 at Harvard University. In 1995/96 he was also Professeur Invite at the University of Metz. He worked on linear, nonlinear, temporally and spatially resolved spectroscopy of II-VI and III-V SC as bulk materials, quantum wells, islands, dots and nano-rods, on epitaxial growth of II-VI and III-V quantum structures and on nonlinear dynamics, self-oscillations and deterministic chaos in driven systems. He (co)authored over 480 publications in scientific journals, book volumes, conference proceedings and was invited to more than 100 colloquia. Book projects: C. Klingshirn, Semiconductor Optics, Springer Heidelberg, 1st ed. 1975, 4th ed. 2012; Zinc Oxide: From Fundamental Properties Towards NovelApplications, C.F. Klingshirn, B.K.Meyer, A. Waag, A. Hoffmann and J. Geurts, Springer Series in Materials Science 120 (2010); Landolt Boernstein, New Series, Group III Vol. 34, Semiconductor Quantum Structures, A: Growth and Structuring, C1-C3 Optical Properties, C. Klingshirn (co-)ed. and coauthor. Referee activities for many (inter)national research funding agencies, scientific journals and Member of the boards of international conferences. He served in the academic self-administration as D