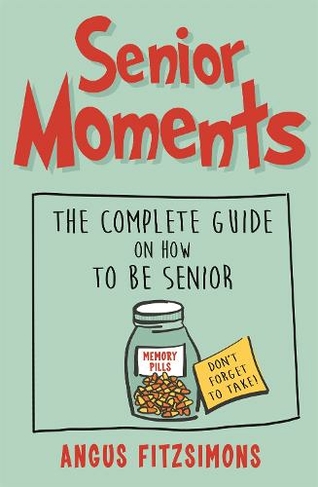 Have you had a Senior Moment yet? Maybe you know someone who's had a few? Check this list to know for sure: * You can remember being told the King was dead (George, not Elvis). * You still say 'colour television', and you watch television on a television. * Your home phone rings and you answer it. (And you still have a phone, not a 'landline'.) * You boast about 'doing it' three times a night and that's just getting up to pee. * You realise that your wardrobe has become ironic. You're not back in fashion, but you're hip. (And ironically, you now have an artificial hip). If you answered 'yes' to one or more of the above, congratulations! You are officially a Senior and this book is here to guide you through your best years (i.e. the past). Stroll, or maybe shuffle, down Nostalgia Avenue and bask in the glory of growing old disgracefully. (If you are a Young Person, this is the easiest Senior gift idea ever. You're welcome!) 'a glorious romp through what it means to be a senior in all its wild, wacky and wonderful - or sometimes not so wonderful - ways' The Senior

Angus FitzSimons is a comedy writer, producer and director, most recently of the smash hit theatrical revue Senior Moments, starring Max Gillies, John Wood, Playschool icon Benita Collings and John Howard, with musical arrangements by the late great Geoff Harvey. He has written sketches and material for Andrew Denton and Doug Mulray, as well as being a staff writer on television shows like Good News Week, Life Support, Backberner, The Chaser's CNNNN, Comedy Inc and David Tench Tonight. For the Movie Network, Angus and his long-term writing partner Kevin Brumpton created, wrote and produced two seasons of the AWGIE nominated TV sitcom The Jesters starring Mick Molloy, Susie Porter and Deborah Kennedy; with Angus directing the second series of the show. In 2016, Angus and Kevin created the comedy revue Senior Moments which premiered at the Glen St. Theatre with Penny Cook and Lex Marinos and has now enjoyed three sold-out national tours across Australia.