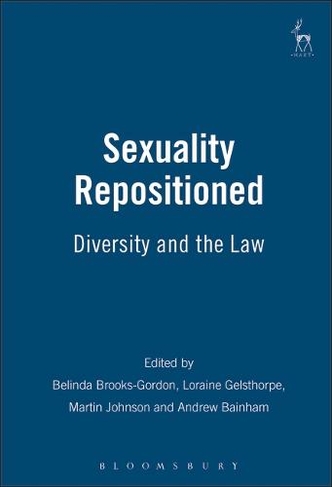 Sexuality Repositioned: Diversity and the Law

Despite the advent of new sexual knowledges,new perspectives, new experiences even, we do not routinely or habitually reflect on the interface of social and legal dimensions of sexuality. Rather, the law is periodically reviewed in response to some crisis or campaign. The idea for the book thus came from awareness that it is important to explore some of the social and moral censures, contours and controversies that shape and mark the boundaries of sexuality. The production of the book has coincided with a major review and new legislation concerning sexual offences, fuelling the authors' concerns and making their explorations timely. Interdisciplinary in scope, drawing in biological, psychological, sociological and historical perspectives to set out the new battlegrounds of sexuality, for instance, but with particular emphasis on socio-legal issues, the book examines the following areas: the development of sexuality and the right to define one's sexuality; genetic maps and sexual politics; sexuality and same sex relationships in law; the law in relation to intersecting oppressions concerning lesbians, gay men and trans people; the sexual abuse of children and the limitations of the law; the contours of regulation concerning young people, 'sexual health', and prostitution; sexual freedoms versus protectionist debates; sexuality, desire and embodied performances in the workplace; sexuality, film and the law, and the law on sexuality in the everyday practice of the Care Standards Tribunal. The book also reviews the recent reform of sexual offences and examines the current vogue for psychological treatment interventions for sexual offenders. This book offers a highly original and exciting new exploration of contemporary socio-legal issues in relation to different sexual positions.