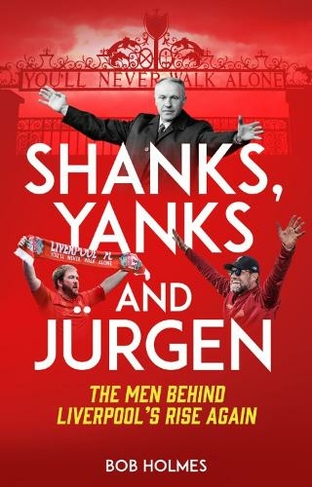 Shanks, Yanks and Jurgen: The Men Behind Liverpool's Rise Again

By Bob Holmes (Author)
Paperback
https://www.whsmith.co.uk/products/shanks-yanks-and-jurgen-the-men-behind-liverpools-rise-again/bob-holmes/paperback/9781785316661-12-000.html £10.65 rrp £12.99 Save £2.34 (18%)
GBP
Availability
In Stock
Free Delivery Available When You Spend £15 Or More
Details
Spend £15 On Eligible Products To Recieve Free Standard Delivery To You Home Or Free Next Working Day Click And Collect To Store
Share

What would the late, great Bill Shankly have made of the current Liverpool side? There's a great deal he would have hated about the modern game, but there's a lot about today's Liverpool he would have liked. With Jurgen Klopp instilling a team ethic and re-engaging the fans, the Reds have restored something of 'Shanks's Holy Trinity' - that union between players, manager and supporters - at least as much as a 21st-century conglomerate will allow. Although he grew up as a socialist during the Great Depression, Shanks was never shy to spend big and used methods ahead of his time. Shanks, Yanks and Jurgen shows how the values he acquired from his pit-village background formed key elements of the Liverpool way. When wounded by tragedies and tricked by con men, the club briefly lost direction. Recovery was started by Liverpool's astute new owners and completed by an inspirational manager, but also by returning to aspects of Shankly's template - albeit in a modern context. Bob Holmes explains how Shanks's philosophies still resonate today. Includes colour picture section

Bob Holmes was a latecomer to journalism and missed a few deadlines while seeing the world. His first piece was about Bill Shankly - written from memory in Nairobi's Stanley Hotel. He has written for the Observer, Evening Standard and Telegraph and published books on football, cricket and rugby union. The wanderlust and a Malaysian wife took him to Sydney's Sun-Herald, and finally Kuala Lumpur, where he lives and comments on English football.