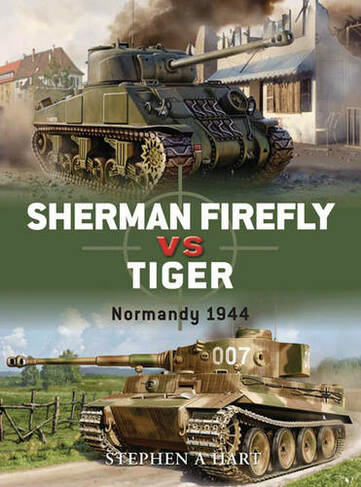 Sherman Firefly vs Tiger Normandy 1944 No. 2

The German Tiger heavy tank was a monster of a machine that dominated the battlefields of Europe. One of the most feared weapons of World War II, the Tiger gained an aura of invincibility that was only shattered by the introduction of the Sherman Firefly during the summer of 1944. Designed by the British to combat the Tiger, the Sherman Firefly was based on the American M4A4 Sherman, but was fitted with a powerful 17-pounder gun which made it a deadly opponent. This book describes the design and development of these two opponents, analyzing their strengths and weaknesses, assessing their tactics, weaponry and training. Gunsight artwork puts the reader 'inside' the tanks during famous battle scenarios, in a victory of superior Allied numbers, tactics and engineering. Illustrations (some col.)

Dr Stephen A. Hart is senior lecturer in the War Studies department, the Royal Military Academy Sandhurst. Prior to this, he lectured in the International Studies Department at the University of Surrey, and in the War Studies Department, King's College London. He is the author of Montgomery and the 'Colossal Cracks': The 21st Army Group in Northwest Europe 1944-45 (Praeger, 2000), and has co-authored - with Russell Hart - several popular histories of the German Army in the Second World War. The author lives in Surrey, UK.