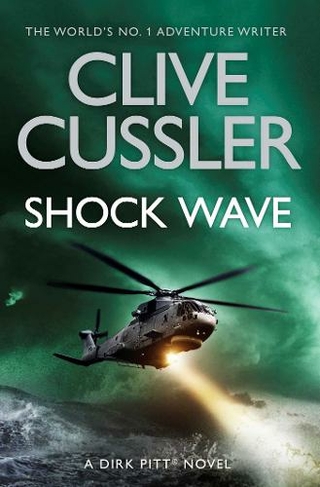 By Clive Cussler (Author)
Paperback
https://www.whsmith.co.uk/products/shock-wave-reissue/clive-cussler/paperback/9781471166716-12-000.html N/A
GBP
Availability
Currently unavailable. We dont know when or if this item will be back in stock
Free Saver Delivery on orders over £25
Details
FREE SHIPPING over £25 for Saver Delivery
Share

FROM THE SUNDAY TIMES BESTSELLING AUTHOR A mysterious plague in the Antarctic. A diamond empire run by an evil genius. A devastating new technology that could kill millions of people. Tasman Sea, 1856. A British clipper ship bound for Australia's penal colony is crushed in a raging typhoon. A few lucky survivors wash up on a deserted island, with two women called Betsy Fletcher and Jess Dorsett among them, and discover an immense supply of diamonds. Seymour Island, Antractica, 2000. Dirk Pitt rescues Maeve Fletcher, a descendant of Betsy's, after an unknown cataclysm kills thousands of marine animals and destroys a cruise ship. Could Maeve's father, who runs a ruthless diamond cartel, be responsible? From a chilling escape at a high-security Canadian mine to a tiny boat adrift on lonely, shark-infested waters, the ingenious Pitt is racing to thwart the danger before an unthinkable disaster claims millions of innocent lives. Praise for Clive Cussler 'Clive Cussler is the guy I read' Tom Clancy 'Nobody does it better than Clive Cussler' Stephen Coonts 'The Adventure King' Sunday Express 'Cussler is hard to beat' Daily Mail 'Just about the best in the business' New York Post

Clive Cussler is as active an adventurer as his fictional heroes which adds a thrilling authenticity to his writing. He is an avid collector of classic cars and has 75 examples of hand-built coachwork. He lives in Colorado with his wife and 3 children.