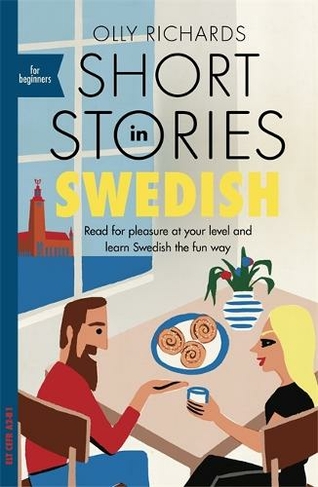 Short Stories in Swedish for Beginners: Read for pleasure at your level, expand your vocabulary and learn Swedish the fun way! (Foreign Language Graded Reader Series)

By Olly Richards (Author)
Paperback
https://www.whsmith.co.uk/products/short-stories-in-swedish-for-beginners-read-for-pleasure-at-your-level-expand-your-vocabulary-and-le/olly-richards/paperback/9781529302745-12-000.html £9.01 rrp £10.99 Save £1.98 (18%)
GBP
Availability
In Stock
Free Delivery Available When You Spend £25 Or More
Details
Spend £25 on eligible products to receive free standard delivery to home or free next working day click and collect to store
Share

An unmissable collection of eight unconventional and captivating short stories for young and adult learners of Swedish. "Olly's top-notch language-learning insights are right in line with the best of what we know from neuroscience and cognitive psychology about how to learn effectively. I love his work - and you will too!" - Barbara Oakley, PhD, Author of New York Times bestseller A Mind for Numbers Short Stories in Swedish for Beginners has been written especially for students from high-beginner to low-intermediate level, designed to give a sense of achievement, a feeling of progress and most importantly - enjoyment! Mapped to A1-B1 on the Common European Framework of Reference (CEFR) for languages, these eight captivating stories are designed to give you a sense of achievement and a feeling of progress when reading. What does this book give you? - Eight stories in a variety of exciting genres, from science fiction and crime to history and thriller - making reading fun, while you learn a wide range of new vocabulary - Controlled language at your level to help you progress confidently - Realistic spoken dialogues to help you learn conversational expressions and improve your speaking ability - Accessible grammar so you learn new structures naturally, in a stress-free way - Pleasure! Research shows that if you're enjoying reading in a foreign language, you won't experience the usual feelings of frustration - 'It's too hard!' 'I don't understand!' Carefully curated to make learning a new language easy, these stories include key features that will support and consolidate your progress, including: - A glossary for bolded words in each chapter - Full plot summary - A bilingual word list - Comprehension questions after each chapter. As a result, you will be able to focus on enjoying reading, delighting in your improved range of vocabulary and grasp of the language, without ever feeling overwhelmed. From science fiction to fantasy, to crime and thrillers, Short Stories in Swedish for Beginners will make learning Swedish easy and enjoyable.

Olly Richards speaks eight languages and is the man behind the popular blog "I Will Teach You a Language." He started learning his first foreign language at age 19, when he bought a one-way ticket to Paris. With no exposure to language growing up, and no special talent to speak of, he had to figure out how to learn a foreign language from scratch. Fifteen years later, Olly has studied ten languages and has decided to reveal how he accomplished his goal of learning foreign languages quickly. Although he started the "I Will Teach You a Language" blog in order to document his latest language learning experiments, his useful and actionable writing quickly transformed the blog into one of the most popular sources of language learning advice on the web. He now produces language books and courses across a variety of mediums with the goal of helping other people to successfully learn a new language.