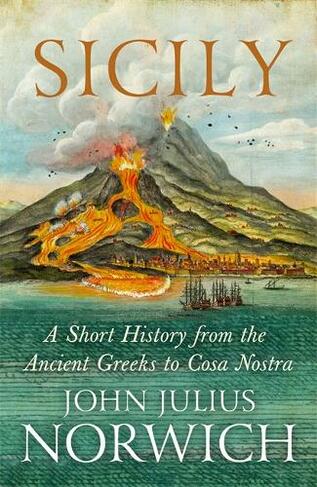 Sicily: A Short History, from the Greeks to Cosa Nostra

'Sicily is the key to everything' Johann Wolfgang von Goethe The author of the classic book on Venice turns his sights to Sicily in this beautiful book full of maps and colour photographs. 'I discovered Sicily almost by mistake . . .We drove as far as Naples, then put the car on the night ferry to Palermo. There was a degree of excitement in the early hours when we passed Stromboli, emitting a rich glow every half-minute or so like an ogre puffing on an immense cigar; and a few hours later, in the early morning sunshine, we sailed into the Conca d'Oro, the Golden Shell, in which the city lies. Apart from the beauty of the setting, I remember being instantly struck by a change in atmosphere. The Strait of Messina is only a couple of miles across and the island is politically part of Italy; yet somehow one feels that one has entered a different world . . . This book is, among other things, an attempt to analyse why this should be.' The stepping stone between Europe and Africa, the gateway between the East and the West, at once a stronghold, clearing-house and observation post, Sicily has been invaded and fought over by Phoenicians and Greeks, Carthaginians and Romans, Goths and Byzantines, Arabs and Normans, Germans, Spaniards and the French for thousands of years. It has belonged to them all - and yet has properly been part of none. John Julius Norwich was inspired to become a writer by his first visit in 1961 and this book is the result of a fascination that has lasted over half a century. In tracing its dark story, he attempts to explain the enigma that lies at the heart of the Mediterranean's largest island. This vivid short history covers everything from erupting volcanoes to the assassination of Byzantine emperors, from Nelson's affair with Emma Hamilton to Garibaldi and the rise of the Mafia. Taking in the key buildings and towns, and packed with fascinating stories and unforgettable characters, Sicily is the book he was born to write.

John Julius Norwich was born in 1929. After National Service, he took a degree in French and Russian at New College, Oxford. In 1952 he joined the Foreign Service, serving at the embassies in Belgrade and Beirut and with the British Delegation to the Disarmament Conference at Geneva. His publications include The Normans in Sicily; Mount Athos (with Reresby Sitwell); Sahara; The Architecture of Southern England; Glyndebourne; and A History of Venice. He is also the author of a three-volume history of the Byzantine Empire. He has written and presented some thirty historical documentaries for television, and is a regular lecturer on Venice and numerous other subjects.Lord Norwich is former chairman of the Venice in Peril Fund, co-chairman of the World Monuments Fund and a former member of the Executive Committee of the National Trust. He is a Fellow of the Royal Society of Literature, the Royal Geographical Society and the Society of Antiquaries, and a Commendatore of the Ordine al Merito della Repubblica Italiana. He was made a CVO in 1993.