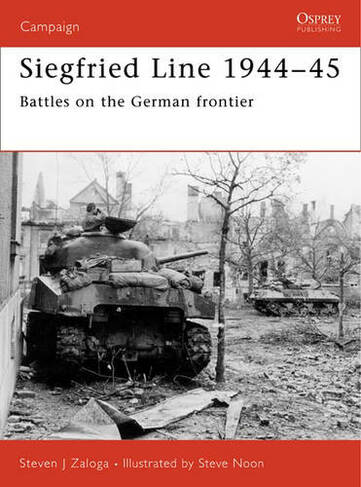 The Siegfried Line campaign was one of the most frustrating and bloody series of battles fought by the US Army in Northwest Europe. The US Army's First and Ninth armies were arrayed against the German Siegfried Line along the German-Belgian border north of the Ardennes, with the objective of breaking through these defences to reach the Roer River as a preliminary step to cross the Rhine. Providing extensive coverage of the battle for Aachen and the fighting that ensued in the Hurtgen Forest, this title brings to life the Siegfried Line campaign, which witnessed the US Army's most bitter fighting and set the stage for the final assault on the Rhine, leading the way into the heart of Germany. Illustrations (some col.)

Steven J. Zaloga was born in 1952, received his BA in history from Union College, and his MA from Columbia University. He has published numerous books and articles dealing with modern military technology, especially armoured vehicle development. His main area of interest is military affairs in the former Soviet Union and Eastern Europe in World War II, and he has also written extensively on American armoured forces. The author lives in Maryland, USA.