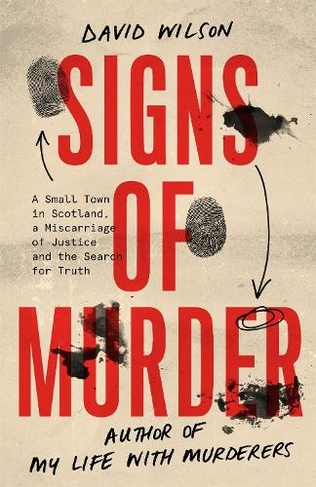 Signs of Murder: A small town in Scotland, a miscarriage of justice and the search for the truth

By David Wilson (Author)
Hardback
https://www.whsmith.co.uk/products/signs-of-murder-a-small-town-in-scotland-a-miscarriage-of-justice-and-the-search-for-the-truth/david-wilson/hardback/9780751578744-12-000.html £16.00 rrp £20.00 Save £4.00 (20%)
GBP
Availability
In Stock
Free Delivery Available When You Spend £25 Or More
Details
Spend £25 On Eligible Products To Recieve Free Standard Delivery To You Home Or Free Next Working Day Click And Collect To Store
Share

'Enthralling ... will leave true-crime readers with more to ponder than they bargained for' - The Herald The new book from the UK's leading criminologist, David Wilson Before David Wilson became the UK's pre-eminent criminologist, he was just a young boy growing up in the Scottish town of Carluke. As a child, the brutal murder of a young woman rocked this small community, but very quickly a man was arrested for the crime, convicted and put behind bars. For most, life slowly carried on - case closed. But there were whispers in the town, that the wrong man was behind bars. Over the years, these whispers grew louder, to the point that any time David would visit, friends and acquaintances would ask in hushed tones: 'But what are you going to do about the Carluke Case?' Carluke believed that a young man had been wrongly convicted. A murderer was still on the loose. Forty years later, it's time for David to return home, and find out the truth.

David Wilson is Emeritus Professor of Criminology and the founding Director of the Centre for Applied Criminology at Birmingham City University. Prior to taking up an academic appointment in 1997, David was a Prison Governor and at twenty-nine became the youngest governing governor in England.Professor Wilson appears in the print and broadcast media as a commentator and presenter. His publishing includes Hunting Evil, A History of British Serial Killing and his autobiography, My Life with Murderers which was shortlisted for the Saltire Prize for Non-Fiction.