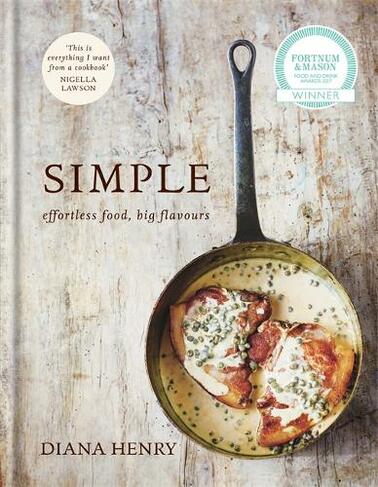 *** Winner of The Fortnum & Mason Cookery Book of the Year Award 2017 'This is everything I want from a cookbook: inspiration, intelligent company, great good-mood food, and beautiful writing.' Nigella Lawson 'No one writes about food so beautifully with recipes which are, as the title says, simple to prepare yet always enticing. A treasure both to give and receive.' Julia Leonard, London Evening Standard 'Her latest book, Simple, is destined to become a classic.' Daily Telegraph 'Diana Henry's latest release is packed with tasty recipes we want to make again and again'. Jamie Magazine 'I have always been a fan of this author for her good basics and sensible recipes that taste delicious. She writes well and gets the gastric juices going'. Irish Examiner 'It's the next best thing to going to a favourite friend's for dinner and knowing that the food will be delicious, you're going to love and be nourished by everything, there won't be a weird fancy table placement and there is no risk that you'll ever run out of wine. Reading her recipes is almost as satisfying as making and eating them.' Daisy Buchanan, The Pool 'A book to adore' Tom Parker Bowles, Mail on Sunday 'Simple is her 10th book, and one of her very best; beautifully written and endlessly inventive, it would make a great gift for anyone interested in good food with minimal effort (i.e. just about anyone).' Felicity Cloake, The Guardian 'Another outstanding collection of recipes for getting lunch or dinner on the table "quickly and easily, but with pizzazz". It's also a fascinating look at how eating habits have changed over the past decade" Sunday Times As featured in Glamour's 'best cookbooks ever written, to help inspire your daily cooking at home' No-one is better than Diana Henry at turning the everyday into something special. Here is a superb collection of recipes that you can rustle up with absolutely no fuss, but which will knock your socks off with their flavour. Peppered throughout the book are ingenious ideas such as no-hassle starters and sauces that will lift any dish. From Turkish Pasta with Caramelized Onions, Yoghurt and Dill and Paprika-baked Pork Chops with Beetroot, Caraway and Sour Cream to Parmesan-roasted Cauliflower with Garlic and Thyme, Diana takes the kind of ingredients we are most likely to find in our cupboard and fridge - or be able to pick up on the way home from work - and provides recipes that will become your friends for life. 130 colour photographs