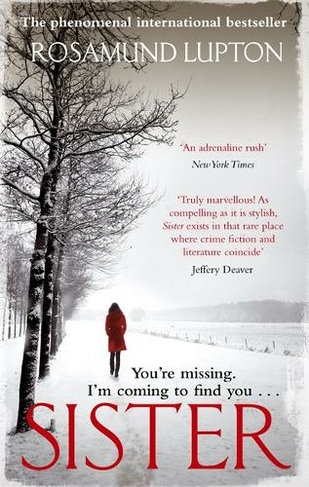 By Rosamund Lupton (Author)
Paperback
https://www.whsmith.co.uk/products/sister-the-phenomenal-sunday-times-and-new-york-times-bestseller/rosamund-lupton/paperback/9780749942014-12-000.html £7.37 rrp £8.99 Save £1.62 (18%)
GBP
Availability
In Stock
Free Delivery Available When You Spend £25 Or More
Details
Spend £25 on eligible products to receive free standard delivery to home or free next working day click and collect to store
Share

'Tear-jerking and spine-tingling' New York Times * THE SUNDAY TIMES BESTSELLER * * THE NEW YORK TIMES BESTLLER * * A BBC RADIO 4 BOOK AT BEDTIME PICK * * WINNER OF THE RICHARD AND JUDY DEBUT NOVEL AWARD * You're missing. I'm coming to find you . . . When Beatrice gets a frantic call in the middle of Sunday lunch to say that her younger sister, Tess, is missing, she boards the first flight home to London. But as she learns about the circumstances surrounding Tess's disappearance, she is stunned to discover how little she actually knows of her sister's life - and unprepared for the terrifying truths she must now face. The police, Beatrice's fiance and even her mother accept they have lost Tess, but Beatrice refuses to give up on her. So she embarks on a dangerous journey to discover the truth, no matter the cost. THE PHENOMENAL INTERNATIONAL BESTSELLER 'Truly marvellous! As compelling as it is stylish' Jeffery Deaver 'Exceptionally confident . . . Packs a devastating emotional punch' Guardian 'An adrenline rush' New York Times 'Crisp insights into grief and familial guilt are married to a confidently executed plot . . . classy debut' Independent 'Grips like a vice' Sunday Times 'Stunningly accomplished from first page to last . . . devastatingly good' Daily Mail 'Superb . . . so many twists and turns' Radio Times 'Tense, gripping and a total page-turner' Richard Madeley, Richard & Judy 'Original . . . Utterly compelling' Closer 'Beautifully written - you believe every word' Judy Finnegan, Richard & Judy 'Sophisticated . . . brilliantly written and utterly gripping' YOU magazine 'Page-turning' Red magazine

Rosamund Lupton graduated from Cambridge University in 1986. After reviewing books for the Literary Reviews and being invited to join the Royal Court Theatre, she won a television play competition and subsequently worked as a screen writer. Her debut novel Sister, was a BBC Radio 4 Book at Bedtime, a Sunday Times and New York Times bestseller, has been translated into over thirty languages and has international sales of over 1.5 million copies. It was the fastest-selling debut of 2010 by a British author, and was winner of the Richard and Judy Best Debut Novel of 2011 Award and the Strand Magazine Critics First Novel Award. Film rights of Sister are currently under option.Lupton's critically acclaimed second novel Afterwards also went straight into the Sunday Times bestseller lists and was the No. 2 Sunday Times fiction bestseller of 2011. The Quality of Silence, her third novel, was a Sunday Times bestseller and a Richard & Judy bookclub pick