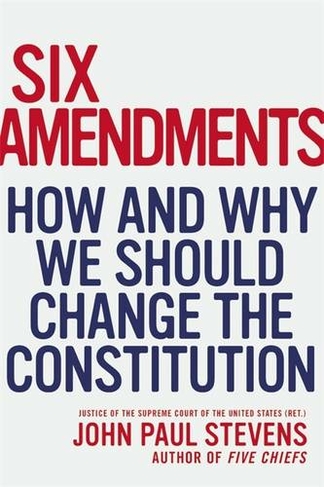 Six Amendments How and Why We Should Change the Constitution

By the time of his retirement in June 2010, John Paul Stevens had become the second longest serving Justice in the history of the Supreme Court. Now he draws upon his more than three decades on the Court, during which he was involved with many of the defining decisions of the modern era, to offer a book like none other. SIX AMENDMENTS is an absolutely unprecedented call to arms, detailing six specific ways in which the Constitution should be amended in order to protect our democracy and the safety and wellbeing of American citizens. Written with the same precision and elegance that made Stevens's own Court opinions legendary for their clarity as well as logic, SIX AMENDMENTS is a remarkable work, both because of its unprecedented nature and, in an age of partisan ferocity, its inarguable common sense. 8pp colour insert

John Paul Stevens served as a Judge of the United States Court of Appeals for the Seventh Circuit from 1970-1975. President Ford nominated him as an Associate Justice of the Supreme Court, and he took his seat December 19, 1975. Justice Stevens retired from the Supreme Court on June 29, 2010. He has written for the New York Review of Books and is the author of Five Chiefs: A Supreme Court Memoir.