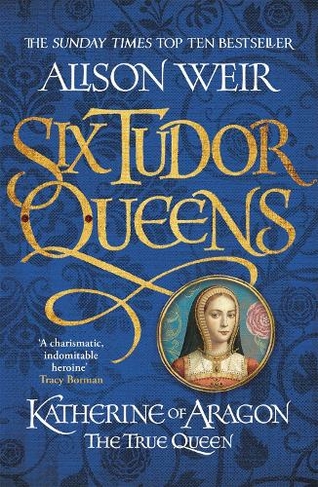 By Alison Weir (Author)
Paperback
https://www.whsmith.co.uk/products/six-tudor-queens-katherine-of-aragon-the-true-queen-six-tudor-queens-1/alison-weir/paperback/9781472227515-12-000.html £8.19 rrp £9.99 Save £1.80 (18%)
GBP
Availability
In Stock
Free Delivery Available When You Spend £25 Or More
Details
Spend £25 On Products To Receive Free Standard Delivery To Your Home Or Free Next Working Day Click And Collect To Store

*A Sunday Times Top Ten Bestseller* Katherine of Aragon: The True Queen by bestselling historian Alison Weir, author of The Lost Tudor Princess, is the first in a spellbinding six novel series about Henry VIII's Queens. Alison takes you on an engrossing journey at Katherine's side and shows her extraordinary strength of character and intelligence. Ideal for fans of Philippa Gregory and Elizabeth Chadwick. 'Shatters the many myths about Henry VIII's long-suffering first wife' Tracy Borman 'Weir is excellent on the little details that bring a world to life' Guardian A Spanish princess. Raised to be modest, obedient and devout. Destined to be an English Queen. Six weeks from home across treacherous seas, everything is different: the language, the food, the weather. And for her there is no comfort in any of it. At sixteen-years-old, Catalina is alone among strangers. She misses her mother. She mourns her lost brother. She cannot trust even those assigned to her protection. KATHERINE OF ARAGON. The first of Henry's Queens. Her story. History tells us how she died. This captivating novel shows us how she lived. SIX TUDOR QUEENS. SIX NOVELS. SIX YEARS. Praise for Alison Weir and Katherine of Aragon: 'A tender understanding of and genuine sympathy for this proud, much-loved and honourable Queen. . . I was gripped [from] start to finish' Mavis Cheek 'Well-researched and engrossing' Good Housekeeping 'Yet again, Alison Weir has managed to intertwine profound historical knowledge with huge emotional intelligence, to compose a work that throws light on an endlessly fascinating historical figure. Yet her real gift in all of this is making it feel so fresh and alive' Earl Spencer 'This exquisite book charts the rise and fall of Henry VIII's first wife, Katherine. . . A fascinating insight into this period of our history. Weir's undeniable strength is her immaculate description, enabling the reader to be transported back to Tudor England' Sun 'Katherine of Aragon, The True Queen is a true tour de force. Finely crafted, this novel is wonderful historical fiction and an outstanding introduction to the Six Tudor Queens series' Queen Anne Boleyn Blog 'Known for bestselling historical biographies, Alison Weir is in command of her detail . . . her handling of Katherine's misery and dignified response to her predicament is very touching' Elizabeth Buchan, Daily Mail

Alison Weir is the top-selling female historian (and the fifth-bestselling historian overall) in the United Kingdom, and has sold over 3 million books worldwide. She has published nineteen history books, including her most recent non-fiction book, Queens of the Crusades, the second in her England's Medieval Queens quartet. Alison has also published several historical novels, including Innocent Traitor and The Lady Elizabeth. Katharine Parr: The Sixth Wife is Alison Weir's eleventh published novel and the final book in the Six Tudor Queens series about the wives of Henry VIII, which was launched in 2016 to great critical acclaim. All five previous novels in the series were Sunday Times bestsellers. Alison is a fellow of the Royal Society of Arts and an honorary life patron of Historic Royal Palaces.