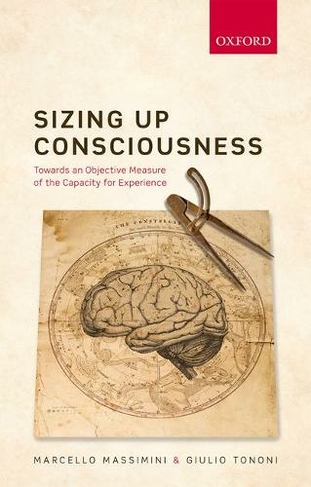 Sizing up Consciousness: Towards an objective measure of the capacity for experience

Also available on eBook for £21.35. Click here to purchase from Rakuten Kobo

Everyone knows what consciousness is: it is what vanishes when we fall into dreamless sleep and reappears when we wake up or when we dream. However, we become less and less confident when we are called to answer fundamental questions about the relationships between consciousness and the physical world. Why is the cerebral cortex associated with consciousness, but not the liver, the heart, the cerebellum or other neural structures? Why does consciousness fade during deep sleep, while cortical neurons remain active? Can unresponsive patients with an island of active cortex surrounded by widespread damage be conscious? Is an artificial system that outperforms people at driving, recognizing faces and objects, and answering difficult questions conscious? Using the Integrated Information Theory (IIT) as a guiding principle, Sizing up Consciousness explores these questions, taking the reader along a fascinating journey from the cerebral cortex to the cerebellum, from wakefulness to sleep, anesthesia, and coma, supercomputers, octopuses, dolphins, and much more besides. By translating theoretical principles into practical measurements, the book outlines a preliminary attempt to identify a general rule to size up the capacity for consciousness within the human skull and beyond. Sizing up Consciousness is a short, accessible book, spanning neuronal activity to existential considerations and is essential reading for anyone interested in awareness and cognition.

Marcello Massimini was trained as a Medical Doctor and received a PhD in Neurophysiology. He worked at Laval University (Canada), at the University of Wisconsin (USA), at the ComaScience Group, University of Liege (Belgium) and is currently Professor of Physiology at the University of Milan (Italy). In 2013, he received the James S. McDonnell Scholar Award. His research team investigates the mechanisms of loss and recovery of consciousness in different conditionssuch as wakefulness, sleep, dreaming, anaesthesia and coma. His current goal is to bring theoretical and basic neuroscience closer to the bedside of brain-injured patients.Giulio Tononi received his medical degree and specialized in Psychiatry at the University of Pisa, Italy. After serving as an Army medical officer, he obtained a Ph.D. in neuroscience as a fellow of the Scuola Superiore. He is currently Professor of Psychiatry, Distinguished Professor in Consciousness Science, the David P. White Chair in Sleep Medicine at the University of Wisconsin-Madison, and the Director of the Wisconsin Institute for Sleep and Consciousness. In 2005 he received the NIHDirector's Pioneer Award for his work on sleep. His laboratory studies consciousness and its disorders as well as the mechanisms and functions of sleep.