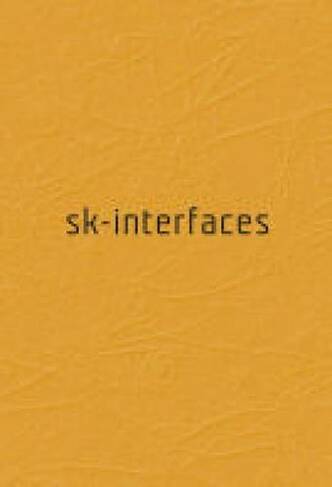 Skin represents a place where art, science, philosophy and social culture intersect. With a growing number of bodily extensions and the continuous discovery of new areas - physical, virtual and psychological - the clear distinctive lines between individuals, countries and even species are beginning to blur. Advances in bio-medical research together with deconstructivist theories in philosophy are reflected in the work of many artists using skin, materially or metaphorically, as an interface, whose work goes beyond the descriptive surface of the skin, to explore issues of xeno-transplants, trans-species and trans-racial exchanges. In recent years, a trend towards the analysis of skin, its functions and meanings, has emerged in the practice of many artists using wet biology, bio-architecture and self-experimentation. Jens Hauser has been involved in much of the development in this area. Bound in a unique thermochromic cover (designed by artist Zane Berzina), this book provides an engaging, critical and thought-provoking approach to how current technologies are changing our perceptions of the body, the self and the interactions between bodies. Edited by one of the leading curators in (bio)technology based art and including contributions from 25 major international artists, scholars and critics in this field, this provocative art and text book examining some of the most contentious moral, aesthetical and philosophical issues of our day will complement the exhibition and encourage debate within this exponentially growing field.

Jens Hauser is a Paris-based art curator, writer, cultural journalist and film-maker. His curatorial work deals with perceptional aspects of technology-related art forms. He has written a number of journal articles about the interaction of film culture, video games, and on contemporary music. He is the director of creative radio pieces, sound environments and documentary films which have been shown in festivals worldwide. Hauser has also been a regular contributor to the European cultural channel ARTE since 1992. Dr Nicole C. Karafyllis is a lecturer at the Institute of Philosophy at Stuttgart University. She studied philosophy & biology in parallel in Germany, the UK, and Egypt; received a doctorate in Ethics in Science and Humanities (Tuebingen University, 1999). Her training in philosophy included a thesis on the "Phenomenology of Growth. Philosophy and scientific History of productive Life between Nature and Technology". Since 1998 she works at the Goethe University, Frankfurt am Main. Within philosophy, she deals with phenomenology, anthropology, bioethics, philosophy of technology, history of science, technology assessment, developing a theory on biofacticity. She introduced the term biofact in philosophy in 2001 to stress the shifting borders between the concepts of nature, biology and technology. Another main topic of her work is the philosophy of plants, situated in a phenomenology of growth. Stephane Dumas lives and works in Paris, he received an MFA from the Pratt Institute in Brooklyn and will shortly be receiving his doctorate from University Paris, Sorbonne, in Visual Arts. His thesis is an investigation of "Creative Skin and the Marsyas Myth'. He has exhibited previously in New York and in Europe and his work is included in the Documenta Archives, Kassel, Germany, the collections of the Museum Ludwig, Cologne, the Brooklyn Museum, the Museum of Modern Art and the Whitney Museum, New York. Last year he had an exhibition at the Safe-T-Gallery, in New York, called 'The Lost Skin Rooms'. Richard Cavell has a Ph.D. in Comparative Literature from the University of Toronto. He studied his B.A. and M.A. at UBC, where he is now Professor of English. He is also the Director of the International Canadian Studies Centre. Professor Cavell began teaching Canadian Literature at the University of Padua in 1979; he returned to Toronto in 1981 to complete his doctorate. He has been Visiting Professor at the Universities of Bologna, Urbino, and Pisa, and has lectured in Britain, Germany, and Japan. Publications include: 'McLuhan in Space: A Cultural Geography' published by the University of Toronto Press (2002; 2003). He is editor of 'Love, Hate and Fear in Canada's Cold War', and co-editor, with Peter Dickinson of 'Sexing the Maple: A Canadian Sourcebook'. He is Joint Editor of the Cultural Spaces series at the University of Toronto Press, and Past President of the Canadian Comparative Literature Association. His research interests are with theories of spatial production and how they apply within cultural studies.