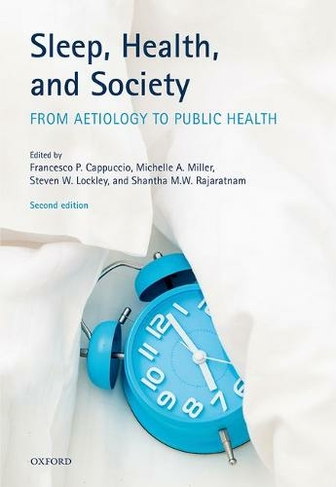 Sleep disturbances and sleep deprivation are increasingly common in modern society. Epidemiological methods of investigation have shown that sleep deprivation is associated with a variety of chronic conditions and health outcomes. Sleep medicine is a rapidly growing field of clinical research, affecting people across their lifespan. Relevant to a wide range of specialities including respiratory medicine, neurology, cardiology, and psychiatry, sleep also has a significant impact on the study of epidemiology, public health, and preventive medicine. Sleep, Health, and Society presents epidemiological evidence linking sleep deprivation and disruption to several chronic conditions, and explores the public health implications with the view to developing preventive strategies. The new edition of Sleep, Health, and Society provides up-to-date information on recently discovered areas of sleep medicine. Fully updated to reflect new research and data, as well as additional new chapters exploring eating patterns, nutrition, pregnancy, cancer, pain, and CBT in relation to sleep. Written by leading experts in the field of sleep medicine, Sleep, Health, and Society is ideal for students and professionals in epidemiology and public health. The research presented would also be valuable to respiratory physicians, neurologists, cardiologists, and psychiatrists who are interested in the impact of sleep disturbances and disorders.

Professor Cappuccio is a cardiovascular physician, a clinical epidemiologist and a public health expert. He trained at Charing Cross Hospital, St George's Hospital Medical School and the London School of Hygiene & Tropical Medicine in London. In 2000 he became Professor of Clinical Epidemiology & Primary Care at St George's, University of London. He is Director of a European Society of Hypertension Centre of Excellence, Head of a World Health OrganizationCollaborating Centre and President of the British & Irish Hypertension Society (BIHS). He is Fellow of the Royal College of Physicians, Faculty of Public Health, British and Irish Hypertension Society, European Society of Cardiology and American Heart Association. He has published more than 450 papers, chaptersand books.Dr Miller obtained her Bachelor of Science Degree (with Hons) in Medical Biochemistry from Royal Holloway College (University of London) in 1986, and her PhD in Biochemistry in 1995 from St Georges, University of London. Her work spans a number of inter-connecting disciplines, including, biochemistry, molecular biology and genetics, epidemiology, medical statistics and population health science. She joined the University of Warwick in 2006 where she established, with Prof Cappuccio, the Sleep,Health and Society Programme. She has published more than 120 papers, chapters and books.Professor Lockley obtained his Bachelors Degree (with Hons) in Biology from the University of Manchester in 1992 and a PhD in Biological Sciences from the University of Surrey in 1997 followed by a post-doctoral fellowship and part-time faculty appointment. In 2008, he was appointed as an Adjunct Associate Professor at Monash University, and in 2013 to Adjunct Professor, before joining the faculty as full Professor in 2014. His research program focuses on the effects of light on circadianrhythms and sleep in both blind and sighted populations, particularly the role of light wavelength, timing, duration and intensity.Professor Rajaratnam was awarded his PhD from Monash University in 1998. He was promoted to Professor in the School of Psychological Sciences at Monash in 2013, and currently serves as the Deputy Head of School and Chair of the Academic Programs Committee. He is Chair of the Monash Sleep Network and leads the Monash Sleep and Circadian Medicine Laboratory. He is Immediate Past President of the Australasian Sleep Association, and is a Program Leader in the Cooperative Research Centre (CRC) forAlertness, Safety and Productivity. He is a Chartered Psychologist and Associate Fellow of the British Psychological Society.