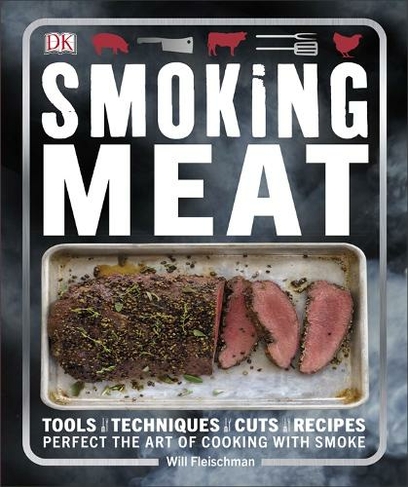 Smoking Meat Perfect the Art of Cooking with Smoke

By Will Fleischman (Author)
Paperback
https://www.whsmith.co.uk/products/smoking-meat-perfect-the-art-of-cooking-with-smoke/will-fleischman/paperback/9780241248287-01-000.html £10.65 rrp £12.99 Save £2.34 (18%)
GBP
Availability
Special order item not currently available. We'll try to order for you
Free Saver Delivery on orders over £20
Details
FREE SHIPPING over £20 for Saver Delivery
Share

Smoking meat is a cookery art form that combines scientific precision with a little smoky alchemy to produce the tenderest, most delicious cuts. Even better, it's something that anyone can do, whether you're cooking with an adapted bucket or a purpose-built Texan smokehouse. Smoking Meat is the ultimate mouth-watering guide to cooking with smoke. Whether you're whipping up some pork belly or spare ribs, Smoking Meat will have you experimenting with endless combinations of woods, heats, meats, cuts, rubs, and sauces. Impress your friends with over 50 inspired meat recipes for every taste, drawing on classic and adventurous ideas for meats from chicken to lobster and pork belly to venison. Smoking Meat is perfect for all foodies planning on hosting a barbeque or just treating your own tastebuds. Mouth-watering photos capture varying textures and colours of the meat to ensure that you're smoking meat the way you want to.

Will Fleischman is an award-winning Texas pitmaster. Prior to tending the pits at Lockhart, Will has been a chef in China, a college professor, and the owner of several small businesses, but BBQ was, and is, his calling. Will's brisket has been sampled by Andrew Zimmern on the Travel Channel's "Bizarre Foods America," and was featured when Will was a competitor on season 4 of Destination America's "BBQ Pitmasters." In 2012, he was named one of the ten best pitmasters in the South by Southern Living magazine.