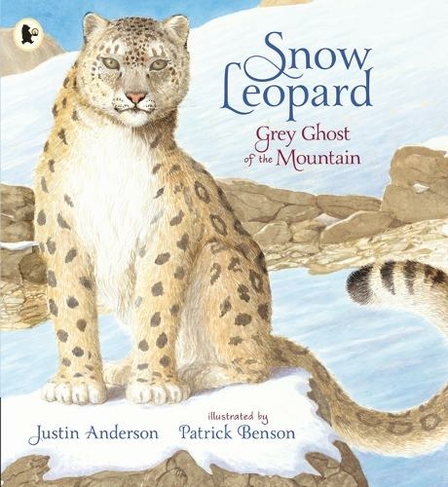 By Justin Anderson (Author), Patrick Benson (Illustrator)
Paperback
https://www.whsmith.co.uk/products/snow-leopard-grey-ghost-of-the-mountain-nature-storybooks/justin-anderson/patrick-benson/paperback/9781406391985-12-000.html £6.55 rrp £7.99 Save £1.44 (18%)
GBP
Availability
In Stock
Free Delivery Available When You Spend £25 Or More
Details
Spend £25 On Products To Receive Free Standard Delivery To Your Home Or Free Next Working Day Click And Collect To Store
Share

A spellbinding new Nature Storybook about one of the most beautiful creatures in the world, with words by Planet Earth producer Justin Anderson and pictures by award-winning Patrick Benson. "Something moves in the rocks ahead. My hands start to tremble. My heart is beating fast. There, just a few footsteps away, is a snow leopard..." Join us on a journey high into the snowy peaks of the Himalaya, and discover the secret world of a rare and utterly majestic creature - how it has adapted to the harsh environment it lives in and how it looks after its young. Complete with an index and a conservation note, this is a wonderful addition to the series and the debut of an exciting new voice in non-fiction writing for children.

Film maker and debut author Justin Anderson has eighteen years of documentary experience working for the BBC. He presented an acclaimed radio documentary for BBC Radio 4 where he tracked arctic wolves across the frozen wastes of Canada. He went on to direct the Mountains episode for the BAFTA and Emmy Award winning Planet Earth II series, filming across the globe from Ladakh and Everest, in the Himalaya, to the remote mountains of Peru. You can follow Justin on Twitter under the handle @JustinFAnderson.Illustrator Patrick Benson has won many awards for his work, including the Mother Goose Award, the Christopher Medal and the Kurt Maschler Award. His picture book Owl Babies is a modern classic and has sold over two million copies worldwide. His other work includes artwork for The MinPins by Roald Dahl, The Little Boat by Kathy Henderson, The Sea-Thing Child by Russell Hoban and Soon by Timothy Knapman.