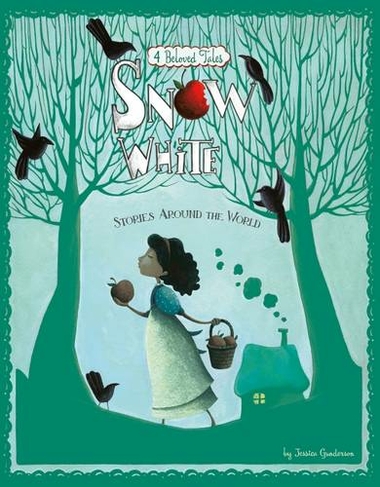 Think there's just one fairy tale with a beautiful girl and an evil stepmother? Think again! Cultures all around the world have their own Snow White stories. Visit Albania, Germany, Mozambique and Turkey, and find out who meets 40 dragons instead of seven dwarfs, and on whose forehead a bright star shines.

Jessica Gunderson grew up in the small town of Washburn, North Dakota. She has a bachelor's degree from the University of North Dakota and an MFA in Creative Writing from Minnesota State University, Mankato. She has written more than fifty books for young readers. Her book Ropes of Revolution won the 2008 Moonbeam Award for best graphic novel. She currently lives in Madison, Wisconsin, with her husband and cat. The fourth girl in a family of 8 children, Colleen Madden made it through childhood pretending to be a space princess with a wookie sidekick and drawing in her cardboard box art studio. Colleen spent some time acting and training at The Second City in Chicago, then went on to graduate from a small liberal arts school in Massachusetts, with a contract major in illustration and English literature. She is currently residing in the Philadelphia area, with her writer-husband, and their 2 sons. She has illustrated for many different kinds of clients and is the recipient of an International Greeting Card Louie Award. When not illustrating, Colleen can be found long distance running, making her boys giggle, and eating lots and lots of sushi. Eva Montanari was born in Rimini, Italy, in 1977. She started out as a children's books author and illustrator while she was still a student, graduating from the State Institute of Art and the European Institute of Design in Milan. Now she is an internationally recognized artist that wrote and illustrated children books that have been published in Italy, United States, Japan, Taiwan, France, Spain, UK and Germany. I was born on the 7th of november 1986 in Cuneo, a city near Turin, Italy . As a young child, I was always drawing and painting and after my graduation I finally decided to make my great passion into a career! This was one of the best choice in my life. I attended a three years post diploma degree, with a master of Illustration at the IED of Turin, Italy, where I graduated in July 2008. During this experience I built up my artist's skills, with a regardful eye to the juvenile illustration market. In 2010 I became part of the freelance Illustrators represented by the MB Artists of New York, having the great possibility to work with several important publishers. This job is amazing and I just want to keep growing up in the great word of illustration, my job and my passion at the same time. Carolina was born in Bahia Blanca, Argentina. She graduated in 1993 becoming both a Professor and Bachelor of Arts specialized in drawing. In 2005 she won the charge of Adjunt Teacher of the department of Drawing in the career of Visual Communication Design at the faculty of Bellas Artes. In 2007 she was selected by the National Cultural Secretariat of Argentina as the illustrator for the XVI Feria del Libro of Habana, Cuba. Carolina is currently working both as an illustrator and teacher.