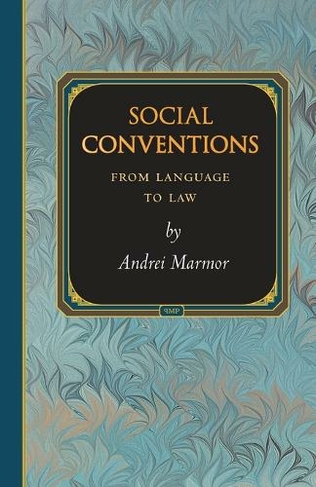 Social Conventions: From Language to Law (Princeton Monographs in Philosophy)

Social conventions are those arbitrary rules and norms governing the countless behaviors all of us engage in every day without necessarily thinking about them, from shaking hands when greeting someone to driving on the right side of the road. In this book, Andrei Marmor offers a pathbreaking and comprehensive philosophical analysis of conventions and the roles they play in social life and practical reason, and in doing so challenges the dominant view of social conventions first laid out by David Lewis. Marmor begins by giving a general account of the nature of conventions, explaining the differences between coordinative and constitutive conventions and between deep and surface conventions. He then applies this analysis to explain how conventions work in language, morality, and law. Marmor clearly demonstrates that many important semantic and pragmatic aspects of language assumed by many theorists to be conventional are in fact not, and that the role of conventions in the moral domain is surprisingly complex, playing mostly an auxiliary and supportive role. Importantly, he casts new light on the conventional foundations of law, arguing that the distinction between deep and surface conventions can be used to answer the prevalent objections to legal conventionalism. Social Conventions is a much-needed reappraisal of the nature of the rules that regulate virtually every aspect of human conduct.

Andrei Marmor is the Maurice Jones Jr. Professor of Law and a professor of philosophy at the University of Southern California. His books include Law in the Age of Pluralism and Interpretation and Legal Theory.