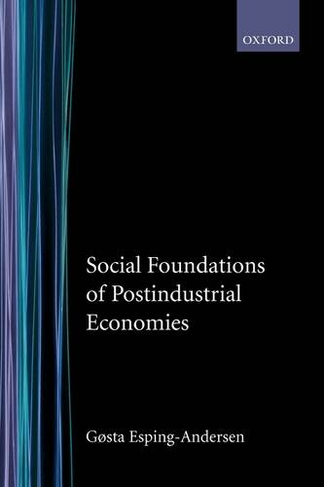 The Golden Age of postwar capitalism has been eclipsed, and with it seemingly also the possibility of harmonizing equality and welfare with efficiency and jobs. Most analyses believe the the emerging postindustrial society is overdetermined by massive, convergent forces, such as tertiarization, new technologies, or globalization, all conspiring to make welfare states unsustainable in the future. Social Foundations of Postindustrial Economies takes a second, more sociological and more institutional, look at the driving forces of economic transformation. What, as a result, stands out is postindustrial diversity, not convergence. Macroscopic, global trends are undoubtedly powerful, yet their influence is easily rivalled by domestic institutional traditions, by the kind of welfare regime that, some generations ago, was put in place. It is, however, especially the family economy that hold the key as to what kind of postindustrial model will emerge, and to how evolving tradeoffs will be managed. Twentieth-century economic analysis depended on a set of sociological assumptions that, now, are invalid. Hence, to better grasp what drives today's economy, we must begin with its social foundations.

Gosta Esping-Andersen is Professor of Comparative Social Systems at the University of Trento, Italy