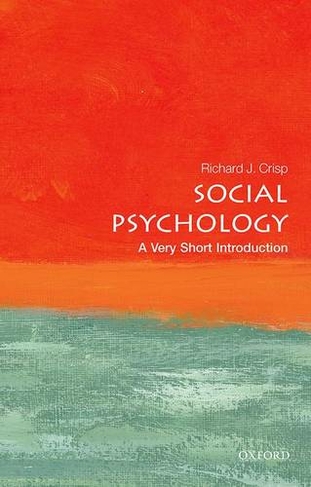 Social psychology is about the people who populate our everyday lives, and how they affect our 'personal universe', defining who we are, and shaping our behaviour, beliefs, attitudes, and ideology. In an age where we've mapped the human genome and explored much of the physical world, the study of people's behaviour is one of the most exciting frontiers of scientific endeavor. In this Very Short Introduction Richard Crisp tells the story of social psychology, its history, concepts and major theories. Discussing the classic studies that have defined the discipline, Crisp introduces social psychology's key thinkers, and shows how their personal histories spurred them to understand what connects people to people, and the societies in which we live. Taking us from the first ideas of the discipline to its most cutting edge developments, Crisp demonstrates how social psychology remains profoundly relevant to everyday life. From attitudes to attraction, prejudice to persuasion, health to happiness - social psychology provides insights that can change the world, and help us tackle the defining problems of the 21st century. ABOUT THE SERIES: The Very Short Introductions series from Oxford University Press contains hundreds of titles in almost every subject area. These pocket-sized books are the perfect way to get ahead in a new subject quickly. Our expert authors combine facts, analysis, perspective, new ideas, and enthusiasm to make interesting and challenging topics highly readable.

Richard Crisp is a professor, writer, scientist, and teacher who has held a lifelong fascination with what makes people 'tick'. He fell in love with Social Psychology while studying at the University of Oxford. His PhD thesis research - an experimental investigation of how people mentally represent social diversity - bore multiple awards and set him on a 20 year voyage of discovery in to the psychology of social behaviour He has published over 130 articles, chaptersand books, and is Editor-In-Chief of the Journal of Applied Social Psychology, an Academician of the Academy of Social Sciences and a Fellow of the British Psychological Society. Richard has won numerous awards for his research and writing including the prestigious British Psychological SocietySpearman Medal for outstanding achievement in published research. He is the winner of the British Psychological Society's President's Award for Distinguished Contributions to Psychological Knowledge 2014.