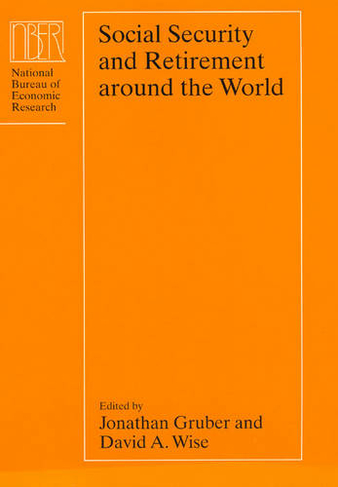 Social Security and Retirement Around the World 1998

In nearly every industrialized country, the population is ageing rapidly and individuals are living longer, demographic trends have strained the financial viability of many countries' social security systems. The financial strain has been compounded by another trend: workers are leaving the labour force at increasingly younger ages. What accounts for this striking decline in labour force participation? One explanation is that social security programmes actually provide incentives for early retirement. This text houses a set of papers that present information on the social security systems, and labour force participation patterns, in Belgium, Canada, France, Germany, Italy, Japan, The Netherlands, Spain, Sweden, the United Kingdom, and the United States.

Jonathan Gruber is a professor of economics at the Massachusetts Institute of Technology and director of research for the National Bureau of Economic Research's program on children. David A. Wise is the John F. Stambaugh Professor of Political Economy at the John F. Kennedy School of Government, Harvard University, and director of health and retirement programs at the National Bureau of Economic Research.