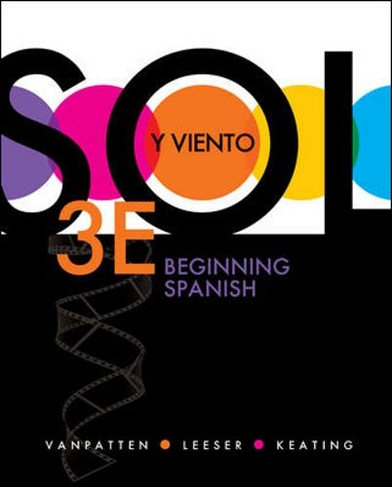 The Sol y viento textbook is firmly framed in communicative-oriented language teaching. Completely meaning-based and drill-free, it uses an input-to-output approach for the presentation of vocabulary and grammar. The annotated Instructor's Edition contains detailed suggestions for carrying out activities in class as well as answers to exercises. It also offers options for expansion and follow-up. Sol y viento integrates the latest in second language acquisition research with the highest quality, Hollywood caliber feature film available for the Introductory Spanish classroom. The Sol y viento program creates a distinct and captivating cultural experience that motivates students to develop their communication skills. Created specifically for beginning language learners, Sol y viento tells the story of a Chilean family and their winery, and of a young U.S. Latino businessman who finds himself intricately involved with the family as his company tries to buy their land. Mystery, romance, and the unexplainable forces of nature all play a part in this spellbinding story, drawing students in and compelling them to want to communicate about the film and its themes.

Bill VanPatten is Professor and Director of Applied Linguistics and Second Language Studies at Texas Tech University. His areas of research are input and input processing in second language acquisition and the effects of formal instruction on acquisitional processes. He has published widely in the fields of second language acquisition and language teaching and is a frequent conference speaker and presenter. His publications include Making Communicative Language Teaching Happen (with James F. Lee, 2003,McGraw-Hill), From Input to Output: A Teachers Guide to Second Language Acquisition (2003, McGraw-Hill), Processing Instruction: Theory, Research, and Practice (2004, Lawrence Erlbaum Associates) and most recently, Theories in Second Language Acquisition: An Introduction (with Jessica Williams, 2007, Lawrence Erlbaum Associates). He is the lead author of Vistazos, i?Sabi?as que...?, Destinos and Sol y viento. Dr. VanPatten is the 2007 recipient of the Anthony Papalia Award for Excellence in Teacher Education, awarded jointly by ACTFL and NYSAFLT. When not engaged in academic activities, he writes fiction and performs stand-up comedy. He has recently published his first work of fiction, a collection of short stories titled Chicago Tales, published by Outskirts Press (2007). Michael J. Leeser is Assistant Professor of Spanish in the Department of Modern Languages and Linguistics at Florida State University, where he is also Director of the Spanish Basic Language Program. Before joining the faculty at Florida State, he taught a wide range of courses at the secondary and post-secondary levels, including courses in Spanish language and Hispanic cultures, teacher preparation courses for secondary school teachers, and graduate courses in communicative language teaching and second language acquisition. He received his Ph.D. in Spanish (Second Language Acquisition and Teacher Education) from the University of Illinois at Urbana-Champaign in 2003. His research interests include input processing during second language reading as well as second language classroom interaction. His research has appeared in journals such as Studies in Second Language Acquisition and Language Teaching Research. He also co-authored Sol y viento and Sol y viento: En breve (2008, McGraw-Hill). Gregory D. Keating is Assistant Professor of Linguistics and Second Language Acquisition in the Department of Linguistics and Asian/Middle Eastern Languages at San Diego State University. Before joining the faculty at San Diego State, he taught courses in communicative language teaching and Spanish teacher education at the University of Illinois at Chicago, where he received his Ph.D. in Hispanic Linguistics and Second Language Acquisition. His areas of research include Spanish sentence processing, the role instruction plays in language acquisition, psycholinguistics, and the acquisition of Spanish syntax and vocabulary. He is a recipient of several teaching awards, including one from the University of Notre Dame, where he received his M.A. in Spanish Literature. In addition to teaching and research, he has supervised many language courses and teaching assistants and has assisted in the coordination of technology-enhanced lower-division Spanish language programs. He is also a co-author of Sol y viento and Sol y viento: En breve (2008, McGraw-Hill).