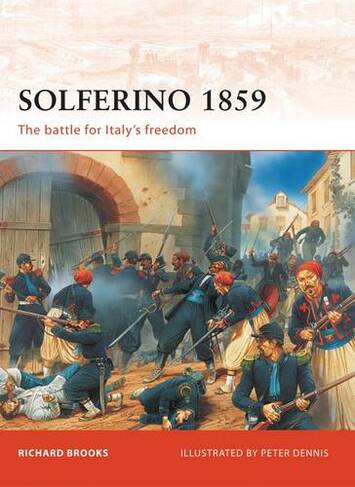 The battle of Solferino, fought during the Franco-Austrian War of 1859, was the largest European battle since Leipzig in 1813. In the presence of three crowned heads of state - Napoleon III of France, Emperor Franz-Joseph of Austria and Victor Emmanuel II of Piedmont-Sardinia (later the King of all Italy) - the armies clashed together in a bitterly fought contest that would leave more than 40,000 dead. As a crucial climax to the Second Italian War of Independence, this title covers the build-up to the battle, including actions at Montebello, Palestro and Magenta that led to the decisive moment of the campaign. Full-colour battle-scene artwork and detailed maps illustrate this comprehensive account of the commanders, armies, plans and aftermath of one of the bloodiest battles of the period. Illustrations (some col.), maps

Richard Brooks is a freelance military historian with a BA in Modern History from Oxford University and an MSc in International Relations from Southampton University. With numerous published articles dating back to 1969 his recent work includes Cassell's Battlefields of Britain and Ireland (Weidenfeld and Nicolson, 2005) and The Royal Marines -1664 to the Present (Constable & Robinson, 2002).